Review: My Soul to Take by Yrsa Sigurdardottir 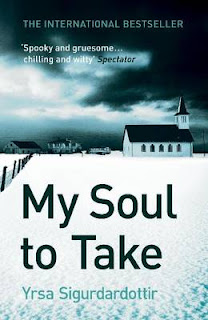 My Soul to Take is the second book to feature lawyer Thora and also sees the reappearance of German ex-policeman Matthew from Last Rituals.

Despite the wintry cover, this book takes place over a few days in June, which though not the height of the Icelandic summer, it isn't snowy!

Thora is called out to a recently opened New Age hotel to help the new owner sue the previous owners for not telling him that the site was haunted.

Thora sends her children to her ex-husband's and prepares to stay the weekend. But the particularly nasty murder of the hotel's architect means that Thora's detective instincts are re-awakened and she has a legitimate reason to investigate when her client is under suspicion and close to being arrested.

There are several guests and employees to be interviewed but Thora believes the answer to the present day murder lies in the past. Thora is joined by Matthew and their charming banter from Last Rituals is resumed.

My Soul to Take is 450 pages long and I was hooked to the end. I had no idea who the killer was. I think it's fair to say that if the right question had been asked of the right person when they first met then this book would have been much shorter but I'm glad it wasn't. The length gives the reader background on Icelandic legends and Iceland's more recent past. I love spending time with the capable, intelligent Thora and the fastidious, willing Matthew and I wonder how their relationship will work out.

This is almost a closed location mystery, with various roadworks and bottlenecks limiting the suspects and poor mobile phone reception. It's not quite a traditional cosy though - a sex-therapist is available for consultation at the hotel!

Though not as gruesome as Last Rituals, there is an unpleasant prologue involving a child which, though there is no on-page violence, is one that lingers.

If the speed of my reading is related to the quality of the translation then this was very well done indeed and leaves me eager to read the next in the series Ashes to Dust.

Karen - A fine review of this book. I'm so glad you liked it. Of course, I'm biased; I very much like Yrsa Sigurðardóttir's work. I, too, am very eager to read the next one.

I liked this one by Yrsa Sigurdadottir, and was glad it wasn't quite as brutal as book I.

Now that you mention it, the beginning few pages about the terrified child was hard to shake.

I am so looking forward to "Ashes to Dust," and am waiting for the library copy.

nice review, Karen. Like you I found some aspects of this novel upsetting, particularly the opening. But it's a good one I agree - though a tad long for my taste. I could have done with one fewer loop by Thora round the suspects. I have read the next one in the series (from the library) and think it is very good so hope you enjoy it.
Maxine.

New to this site, but this is an author I have not heard of so looking forward to reading this series, just sent the first book in the series to my kindle. Thanks a lot. Will be checking back here a lot as it seems like a great site! :)