The tv version of Michael Dibdin's Zen series will begin on 2 January on BBC One at 9pm. It starts with the second book in the series, Vendetta, and stars Rufus Sewell as Aurelio Zen. Cabal will be shown on 9 January. Read an interview with the stars, Rufus Sewell and Caterina Murino on the BBC website. 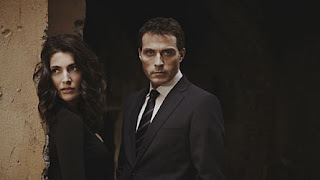 In Vendetta, Zen is called upon by the Ministry to re-investigate a multiple murder. Flamboyant millionaire and Government construction magnate Oscar Faso and his guests have been shot dead at his lavish villa. Prime suspect and friend of Faso, Renato Favelloni, has "found God" in prison and is retracting his confession, a move which stands to send shockwaves through Government – so Zen must intervene. All the evidence points towards Favelloni's guilt but Zen is convinced he is innocent. Zen heads into the mountains to investigate, reluctant to leave the promise of romance with Tania Moretti, the Chief's new assistant.

As he leaves, news breaks of another murder: Judge Bertolini, an anonymous figure in the Italian judicial system, is shot dead in his car. What Zen doesn't realise is that this unconnected murder is part of a vendetta carried out by a man wrongly imprisoned by Bertolini years earlier. More importantly, Zen's involvement in the case means he is next on the hit-list.

As he struggles between doing the right thing and saving his career, Zen must contend with hostile locals, an attempted kidnapping and a chase through a maze of underground tunnels while the killers draw ever closer to him.

The tv adaptation of the fourth book in the Anna Travis series, Deadly Intent, by Lynda La Plante is being shown in January. The first of the three-parter will be on 3 January at 9pm on ITV1.

DI Anna Travis (Kelly Reilly) is back after her promotion, reunited with DCS James Langton (Ciarán Hinds) and DCI Mike Lewis (Shaun Dingwall), who is also promoted to head up his first murder case, a fatal shooting in a notorious drug dealer’s squat. The victim is Frank Brandon (Callum Sutherland), disgraced ex-police officer and friend of Langton’s. The team discover that Frank has recently married Julia Larson (Stine Stengade), a glamorous, wealthy woman, after working as her driver. It’s an incongruous set-up, and Travis digs deeper into the not-so-grieving widow’s story.

You can read more about the plot and also "Lynda La Plante explains why her latest protagonists in Above Suspicion work so well" at the ITV website.
Posted by Karen (Euro Crime) at 9:42 am

Ditto, Elaine! And read the Zen books, which are great.

Oh, gosh, more tv programs to turn green with envy about, over here across the Atlantic.