pps to Translated Delights in 2011

I've just added another title to the International Dagger Eligibles - the list is up to 49 now.

The title added is Hotel Bosphorus by Esmahan Aykol from Bitter Lemon Press in April 2011. Not only does it feature a crime bookshop owner but is also states on the cover "the first Kati Hirschel murder mystery" (there are three so far). 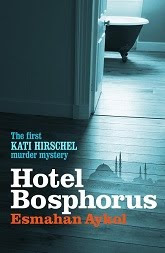 Kati Hirschel, in her thirties, is the proud owner of Istanbul’s only crime bookshop. When the German director of a film starring an old school friend is found murdered in his hotel room Kati cannot resist the temptation to start her own maverick investigation. After all her friend Petra is the police’s principal suspect and reading all those detective novels must have taught Kati something. This is a crime story but also a wonderful book about Istanbul and Turkish society. It uses humour, social commentary and even erotic fantasy to expose Western European prejudices about Turkey as well as Turkish stereotyping of other Europeans.

More translated delights can be found here and here.
Posted by Karen (Euro Crime) at 9:32 pm

This looks quite good, and for me, a good introduction to life in Turkey, with what could be better than a woman protagonist?

Me too, I'm definitely keen to read this one, thanks for flagging it up!