Michael Ridpath's Where the Shadows Lie came out earlier this year, the first in a series set in Iceland. Fellow Brit, Quentin Bates will have his first Iceland-set crime novel published by Constable in January (the first of a two-book deal). 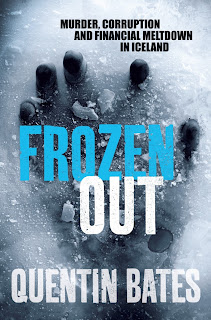 The discovery of a corpse washed up on a beach in an Icelandic backwater sparks a series of events that propels the village of Hvalvik’s police sergeant Gunnhildur into deep waters.

Although under pressure to deal with the matter quickly, she is suspicious that the man’s death was no accident and once she has identified the body, sets about investigating his final hours.The case takes Gunnhildur away from her village and into a cosmopolitan world of shady deals, government corruption and violence. She finds herself alone and less than welcome in this hostile environment as she tries to find out who it was that made sure the young man drowned on a dark night one hundred kilometres from where he should have been – and why.

From amazon:
"Although born in the UK in 1962, through a series of coincidences Quentin Bates found himself working in Iceland in his gap year. The gap year then became 10 years, during which time he managed to get himself married, produce a family, and generally go native in Iceland. The family then moved back to the UK in 1990 where Quentin became a full-time journalist on a commercial fishing magazine. Frozen Assets* was born through the author's own inside knowledge of Iceland and its society, along with exploring the world of crime. He and his (Icelandic) wife frequently return to Iceland, where they have many friends, including several in the Reykjavik police. "

*I'm not sure if the final title will be Frozen Assets or Frozen Out or perhaps it'll be different for US/UK.
Posted by Karen (Euro Crime) at 4:03 pm

Blogger ate my comment, but in case it did not get through, this sounds great! I wonder what the appeal of Iceland is, all of a sudden, to non-Icelanders? It's been a long time since Desmond Bagley.

I was there last year and it's an amazing country. Half is heading for America and half for Europe -- literally. The country gets 2cm wider ever year. Women are forbidden by law to take their husband's name on marriage. Only 320,000 people, over half of whom live in Reykjavik.

I don't know if you noticed, Ragnar Jonasson joined the CWA recently -- I must admit I had not heard of him till his email arrived in my in-box. Another author to hunt down and read....

I'd dare to say that Arnaldur Indridason is a major reason for the popularity of Icelandic books.

And then Yrsa Sigardadottir also adds to the adventure that is Iceland.

Both series give such a great sense of place, but different personalities exploring it.

And, both series have sent me to Google to find out more about the country.

So when is it Greenland's turn? I only know and read one book set there and that was years back....