The Spooks spin-off series, the six-parter Spooks: Code 9, will begin on BBC3 on 10th August at 9pm. 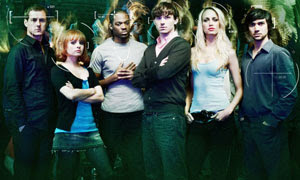 From the BBC press release:

The year is 2013. Thames House is gone and regional MI5 Field Offices have sprung up in its place. Are six young new recruits tough, moral and clever enough to protect Britain's future...?

London has been evacuated following a nuclear bomb and the country's power base has shifted north. In the wake of the attack, MI5 must completely restructure and establish field offices across the UK, working to gather intelligence from the very heart of local communities.

They need young, new officers on the ground – and fast. Luckily, Britain's youth is more than up to the challenge and is fighting back from the attack with a new sense of patriotism, combined with the hedonism that comes from being face to face with their own mortality. It is members of this new generation of patriots who help make up MI5's new Field Office 19.

Thought you might be interested in this...
http://www.facespook.co.uk
It allows you to upload a picture of your own face and star in a mini scene from spooks code 9.
Ive lost a few hours playing with this already, its awesome!!