I've blogged before about David Tennant being the narrator of four Doctor Who audio books and I thought I'd give Freema Agyeman (Dr Martha Jones) a go as well. So far she's narrated abridged versions of Wetworld by Mark Michalowski and The Last Dodo by Jacqueline Rayner. Due to be released on the 10th is, The Pirate Loop, also read by Freema. 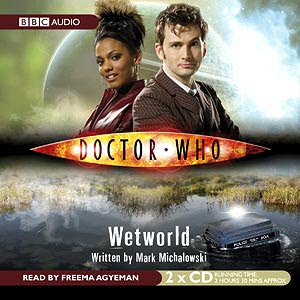 Wetworld begins with the TARDIS landing on the swamp planet of Sunday. It only takes a few minutes for the TARDIS to be submerged in deep water with Martha still inside. Martha is kidnapped by an underwater creature and the Doctor goes for help to recover the TARDIS. He quickly discovers a group of humans who are the advance party, making the world suitable for Earth's overspill population. Martha is soon recovered but why is she desperate to return to the water and why are the otters, captured by the settlers, changing from aggressive and stupid to friendly and clever? 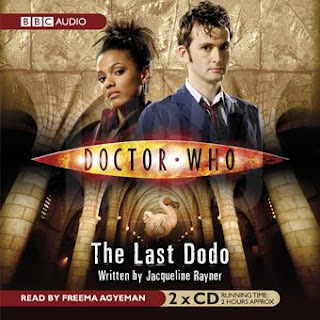 The Last Dodo sees Martha and the Doctor aiming for Mauritius so that Martha can see a real life dodo. Unfortunately the 'automatic dodo detector' sends the TARDIS to MOTLO, the Museum of the Last Ones, where Eve and her team capture the very last specimen of a species so as to keep the species 'alive' - the specimen is kept in stasis. The duo's arrival sets off a chain of events which leads to sabre tooth tigers back on Earth (and in the high street!) and culminates in the truth behind the creation of MOTLO.

Freema Agyeman's narration is eminently listenable to and she captures the Doctor's cadence and speech pattern well. She uses a number of accents to discriminate between the characters and I was impressed enough to pre-order The Pirate Loop.

Storywise though, it's hard to say how much the abridgement is to blame. Wetworld seemed particularly choppy, if you'll forgive the pun, with the action jumping from one scene to the next, in particular Martha's rescue. The Last Dodo seemed much smoother.

The dialogue in Wetworld is also not as good as in The Last Dodo. The Doctor referring to the monster as "Slimey" and using a phrase such as "That's a bummer' didn't feel right. On the other hand, the dialogue in The Last Dodo appears much more like the tv series and includes the Doctor's excruciable jokes.

The Last Dodo is told mainly from Martha's point of view and in parts is told directly by her to the listener as if they were a friend on the end of the phone and thus it is especially suitable for narration by Freema Agyeman.

Both stories have a common underlying theme of green issues; the Doctor's abhorrence of cages for animals; his anger at the settlers using a heavily polluting fusion reactor on their new planet.

Coming soon, my random thoughts on the new(ish) Torchwood audio books: Everyone Say Hello and Hidden.
Posted by Karen (Euro Crime) at 8:01 am