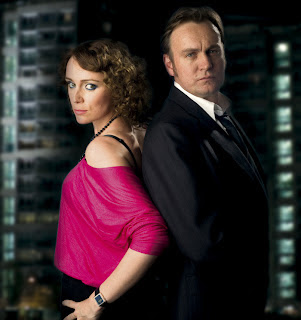 I've finally got round to watching Ashes to Ashes and I thought 6 of the 8 episodes were smashing and I'm not missing Sam Tyler as much as I'd thought. Googling away to see when the next series will be out - it looks to be October 2009 with filming beginning this summer.

On TV Scoop in June, writer Ashley Pharaoh had this to say about the next series:

"We've just handed in episode one. It's set in 1982, so the Falklands have just happened. We're taking it slightly darker this time, now the characters have been established. The first episode is about a murder in a strip club in Soho, and there's a lot of the 80s left and it's a good excuse to get the music off iTunes. I'd like to do another series after this one too; Matthew and I have a big story we want to tell when the whole thing ends."

There's a longer interview with the writers of Life on Mars and Ashes to Ashes on the Manchester Evening News site.
Posted by Karen (Euro Crime) at 7:12 pm

Ooh, good, I loved both series - glad they're coming back! Mind you, anything with the glorious Philip Glenister in just rock.