George Gently on the telly (again) 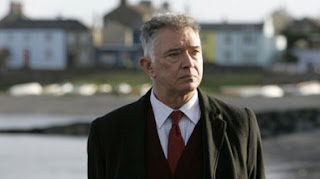 Martin Shaw is back as George Gently. The first of two new episodes is on at 8pm on Sunday. From the BBC press release:

Following the success of his first television outing last year, George Gently is back with two gripping new cases for BBC One, adapted for the screen by Peter Flannery (Our Friends In The North) and Mick Ford (William And Mary) from the George Gently series of novels by Alan Hunter.

Martin Shaw reprises his role as Inspector George Gently, whose impassioned investigations reveal the dark underbelly of a society on the cusp of change. The dramas are set in 1964 Northumberland.

The first of the two self-contained dramas is Bomber's Moon, which sees Gently and Bacchus investigating the death of Gunter Schmeikel, a returning German POW whose body is found in the harbour of a small fishing village.

Doesn't he look old? I remember when he was a hearthrob and everyone (it seemed) swooned over him. I never watched his Judge Dread (?!) series, was it any good?
(Deed, maybe.)

My daughter and I used to love the Judge. And a couple of years ago I splashed out a fortune for us to see the great man in person in a West End theatre. Made me very popular with my daughter, and he was certainly very swoonable at the time. (Though when I confessed the tickets had been very expensive, her guess was in the region of £15, which I would have considered cheap.)

Did you see him as Dalgliesh?

Last night's episode seems to have gone awol. I assume they'd have dropped Dibley but no.

I quite liked him as Dalgleish but a hard job for him to usurp Marsden - as he was my Dalgleish, much as Tom Baker was my Dr Who :-).