As promised, here are my thoughts on the two Torchwood audio books I've listened to recently. Perhaps as some kind of compensation for the events at the end of series 2 of Torchwood and also not being able to appear in the last two episodes of the current series of Doctor Who, these audio books are narrated by Burn Gorman and Naoko Mori aka my two favourite Torchwood characters, Owen and Tosh.

The two books, Everyone Says Hello by Dan Abnett and Hidden by Steven Savile are exclusive to audio and couldn't be more opposite. 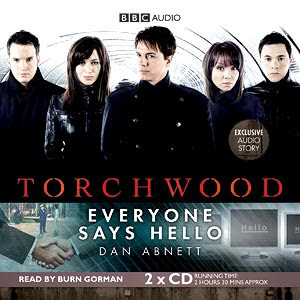 Everyone Says Hello begins with unexplained rift activity and Owen being called to the Hub. On his way in he notices that everyone is being particularly friendly and offering up interminable family history and preferences. He jokingly asks Jack if that's the reason they've been called in and it soon turns out to be true. Tosh and Ianto stay behind at the Hub to find the source of the disruption whilst Jack, Owen and Gwen, complete with protective wristbands, head out. They discover that most of the local population have turned into 'greeters' with some exceptions including PC Pratt who joins them. Unfortunately for Jack, he cracks his wristband and begins to succumb to the 'infection'. Can the team stop him going over to the friendly side and can they stay alive themselves? Paying homage to classic Trek, Jack pulls a Captain Kirk on the aliens to save the day. 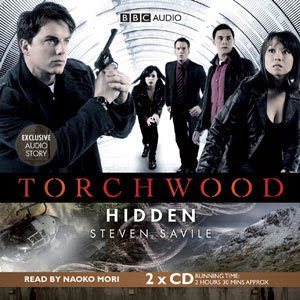 Whilst the plot of Everyone Says Hello is fairly straightforward, Hidden is anything but simple and indeed the answers and details of what's occured remained hidden, at least to me. It begins with the crash of an Environment Agency helicopter with the loss of the pilot and passengers (I was a bit distracted by this as I used to work for the EA) which is shortly followed by two other accidents. Jack is upset when he hears about the deaths and strides out of the Hub leaving the rest of the Torchwood gang puzzled and unable to contact him. Ianto is sent out to a fertility clinic and Owen and Gwen off to an archaelogical find - the tomb of an alchemist who was working on having eternal life. The action then steps up with Ianto being chased in a car and later Owen and Gwen being shot at. Quite exciting stuff but the reasons behind it all do not make much sense in the final analysis.

Burn Gorman nails the accents of his fellow human team members and does a variety of Welsh accents credibly but he cannot or does not attempt to mimic Jack as played by John Barrowman. There's only an occasional hint of an American accent. Meanwhile Naoko Mori is able to capture Owen and does a very good Captain Jack but struggles with Gwen and Ianto and in a conversation between Gwen and Owen I couldn't tell who was speaking.

In conclusion, Everyone Says Hello is well narrated, easy to follow and amusing in parts. Hidden is convoluted, a mess of a story and the narration quality is a bit variable.
Posted by Karen (Euro Crime) at 8:31 pm

But the pictures of the man in the middle (top) and on the left (bottom) are nice ;-)

I'm still disappointed that Dr Who didn't regenerate into him!

Maxine - you can get a fix next week :-). Look out for: John Barrowman – The Making Of Me next Thursday at 9.00pm BBC1: "John Barrowman embarks on a journey of self-discovery to find out the truth about his sexuality. John is a successful actor, musical performer, dancer, singer and TV presenter. For as long as he has been aware of his sexuality, John has been convinced that he was born gay and firmly believes that homosexuality is not a choice. But did nature really mould him or did nurture have a part to play?"

Episodes don't last long on Stage6 as it is, and the best channel for Torchwood and the best poster of Torchwood videos have been found by searchbots.Your simple show about aliens. I would liken it to SU2. Replace the aliens with "links" and it would be the same show.