Who is Lou Sciortino? reviewed in The Metro

Thursday's Metro ran a review of 'Who is Lou Sciortino?' by Ottavio Cappellani. The review isn't online but as it's short I've typed it in: 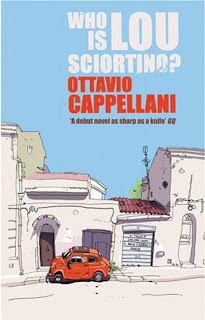 Fans of The Sopranos who can't wait for the final series of the US TV show to arrive on British screens should check out this Italian Mob novel. Who is Lou Sciortino? is a comic and sometimes confusing excursion into the world of so-called organised crime, where a surburban barbecue can be more dangerous than a dark alley.
Lou is the grandson of Don Lou, LA's top Mafia boss, but he's not made for the life. After a bomb goes off in the offices of his Hollywoood film company (in fact a money-laundering operation), he's sent off to Sicily until things calm down. There, he is bullied into acting the picciotto (foot soldier) for the untrustworthy Uncle Sal, and Don Lou decides things need to be taken in hand.
Sicilian journalist Ottavio Cappellani has written a smart first novel where old men reminisce while the plot unfolds in a flurry of slick and grisly hits - one person dying 'with a Prada stiletto heel hammered into his left eye'. Hardly groundbreaking but thoroughly satisfying entertainment. (Jonathan Gibbs in The Metro)