I really will shut up about The Last Confession but I am intrigued by the forthcoming book from Juan Gomez-Jurado entitled 'God's Spy'. Actually 'God's Spy 'came out in the US in April, to good reviews I believe, but it won't be out in the UK until July. 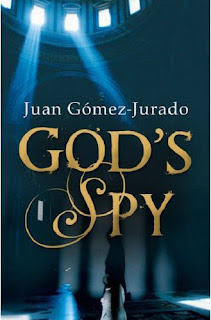 Synopsis from amazon.co.uk: The novel takes place in the days following the death of Pope John Paul II, when 115 cardinals have to be called to the Vatican in order to take part in the Conclave to elect the new Pope. With Rome under siege to foreign press and thousands of mourners, the last thing it needs is a serial killer on the loose. Paola Dicanti is a profiler who works with the Italian police - she has been put in charge of profiling serial killers in a department of one ie herself. She is untested and her experience of serial killers is, as yet, theoretical. This is until she is called to the church of Santa Maria in the Vatican state. A cardinal has been found murdered, his eyes destroyed, his hands cut off. It seems that this is not the first victim - another cardinal was found in similar circumstances but the authorities didn't want a scandal. Recovering from a bitter affair with her boss, Paola begins to build her profile using information from the scene of the crime, from the autopsy, and from forensic evidence. She is helped in this by Anthony Fowler, a priest from the States. But it turns out that Fowler is no ordinary priest - he clearly has links to the CIA, and knows a lot about the serial killer than Dicanti could ever have guessed. The situation is complicated further when a young female journalist intercepts tapes that were meant to be sent to the press, putting her life in danger.

'God's Spy' is Spanish author Gomez-Jurado's first book. Read more on his website plus there's a website for the book where you can view a map of the Vatican, read about the characters and so on.
Posted by Karen (Euro Crime) at 9:52 pm

Thanks a lot for your post! Hope you enjoy my book... I'm eager to see the reaction of the british people.

Let's be in touch: juan@juangomezjurado.com