Blog Tour: Review of The Shrouded Path by Sarah Ward

I'm very pleased to have been invited onto the blog tour for Sarah Ward's latest book, The Shrouded Path. I've reviewed the previous three: In Bitter Chill,  A Deadly Thaw and A Patient Fury. 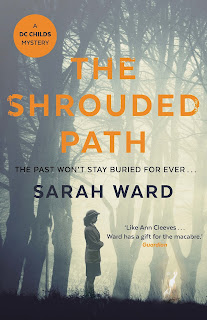 THE SHROUDED PATH opens with a chilling premise. Six schoolgirls enter a railway tunnel but only five emerge. This event is witnessed by a younger girl and it haunts her for a lifetime.

Sixty years later, DC Connie Childs is looking into the unexpected death of a woman in her seventies. Her boss DI Sadler is on leave and whilst out walking in the nearby Peaks he meets a woman called Mina whose mother, also in her seventies, is currently dying in hospital of cancer.

Mina's mother has been agitated of late. She says she's seen “Valerie” but that she can't of as she killed her. Mina, understandably shocked by this revelation, promises to find Valerie and makes sure that she's well.

Sadler is called back to work when there is a suspicious death at the hospital and Mina sets off to find out about Valerie armed with an old photograph of five girls, her mother's school-friends.

Connie and Sadler's investigations draw closer over the book as they unearth a decades-old wrongdoing which is still reverberating in the present day. Tragedy ensues for innocent and guilty alike and the Bampton police team will be deeply affected.

From its atmospheric cover to the final page, THE SHROUDED PATH hooks the reader in and keeps them there. It sounds a deceptively simple premise however things are not what they seem and it is a knotted tale indeed. As with earlier books the narrative is told both by the professionals: Connie and Sadler, but also by a civilian, in this case Mina, a professional gardener with the excellent logo of 'The Land Girl'.

This is the fourth book in the quartet and it ends satisfactorily for the detectives we've enjoyed reading about but I do hope that they will return. 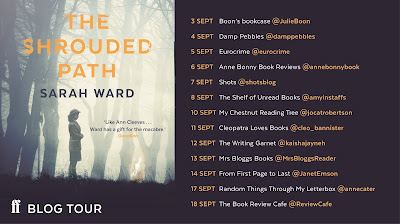