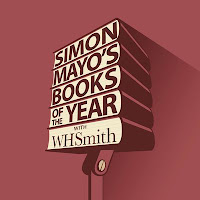 I used to download the podcasts for Simon Mayo's book group back when he was on Radio 5. I missed out on the Radio 2 book club,  which has now disappeared.

Simon Mayo and Matt Williams, have set up an independent podcast, called Simon Mayo's Books of the Year. It's been running for a few months and has included appearances from crime writers, Lynda La Plante, DB John and Manda Scott.

I'm enjoying it though I would like to see more women writers on the show, currently twice as many men have appeared.

You can download it via iTunes and I have been using the Acast app to listen to it on my android phone. Here's the Acast website listing all the episodes so far. The author interviews are every fortnight with a teaser episode in the gap. Also on twitter: @BooksOfTheYear.
Posted by Karen (Euro Crime) at 3:00 pm