I'm focussing my reading/reviewing this summer on debuts - including first crime novels from authors known for a different genre. Mostly British but I have also reviewed one from New Zealand. My fourth entry in this feature, is Vicky Newham's Turn a Blind Eye. 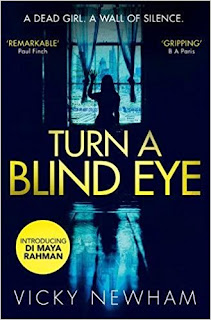 I've been eagerly awaiting reading Vicky Newham's debut, having followed her progress via Facebook and in person at CrimeFest, and I'm pleased to report that it doesn't disappoint.

TURN A BLIND EYE introduces DI Maya Rahman, who is based in East London where she grew up after arriving from Bangladesh at a young age. The book opens with scenes in Bangladesh at the funeral of Maya and her sister's brother.

Returning to London, she is thrown into a murder case at the school she went to as a young girl. The headmistress has been killed and a cryptic message has been left. A message which indicates that there has been or will be more linked deaths.

Maya also has a new team member, a fast-tracked Australian, DS Dan Maguire, whose family is back in Australia. Chapters are told from the points of view of Maya and Dan with occasional chapters from the teacher who found the body.

TURN A BLIND EYE is a detailed and authentic feeling police procedural. The introduction of an outsider – Dan – gives Maya a natural opportunity to expand on the history, geography and background to the case and area that they're working in. Maya comes across as a serious, capable individual and there is a mystery in her childhood which could be resolved in one book or teased out over more. I'm looking forward to finding out which.
Posted by Karen (Euro Crime) at 11:45 am