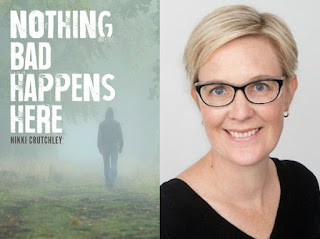 Having been hooked on New Zealand's tv shows, 800 Words and The Brokenwood Mysteries, I was very pleased to be asked again to get involved in the blog tour for the Ngaio Marsh Awards which celebrate New Zealand's crime fiction.

As I've been focussing on debuts this summer I asked if I could review one of the shortlisted debut novels and I chose NOTHING BAD HAPPENS HERE by Nikki Crutchley which is available in the UK.

NOTHING BAD HAPPENS HERE is set in the fictional coastal town of Castle Bay in the Coromandal region of the North Island. The book opens with the murder of a young woman and chapter one is the discovery of her body a few months later by a hiker.

Sergeant Kahu, who moved to the small town ten years ago after time working in the big city, is able to identify the body as British tourist Bethany, who disappeared a few months ago whilst travelling round the world and was last seen in the bar in Castle Bay.

Kahu is shunted aside when the “more experienced” detectives show up as does the press… And in the first of several misdirections, the author switches the main point of view from Kahu to Miller, a journalist who is to write a feature on Bethany with a hope of securing a promotion. Miller is dependent on alcohol and grieving the recent death of her mother.

Due to her late arrival and no accommodation in town, Miller has to stay at the New Age-y Haven, a wellness retreat whose current residents include local queen bee Patricia, wife of the mayor and two other young women. Patricia and other locals keep insisting that their town is safe and nothing bad happens there.

Miller's writing project is slow and though she befriends Kahu he doesn't give her much publishable material. A tip-off seems to lead to a suspect and another woman goes missing. Is Bethany's murderer a local and not a passer-through as first thought?

NOTHING BAD HAPPENS HERE builds an oppressive picture of a small town where there are no secrets or at least your secrets aren't secret forever. Autumn is coming and the wild weather adds to the feeling of claustrophobia. There are several scenes which I read one way and when I got to the end of the book I realised I'd read them completely wrongly. The author conceals the true meaning whilst putting things in plain sight. I'm not sure whether this is the first in a series but I'd like to read more about either of the main characters, Kahu and Miller and what happens in their lives after this dramatic episode which leaves them both changed.

I found myself thinking about this book, the setting, and the plot long after I'd finished reading it.