Review: The Intrusions by Stav Sherez 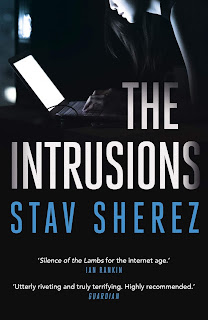 When a distressed young woman arrives at their station claiming her friend has been abducted, and that the man threatened to come back and 'claim her next', Detectives Carrigan and Miller are thrust into a terrifying new world of stalking and obsession.

Taking them from a Bayswater hostel, where backpackers and foreign students share dorms and failing dreams, to the emerging threat of online intimidation, hacking, and control, The Intrusions explores disturbing contemporary themes with all the skill and dark psychology that Stav Sherez's work has been so acclaimed for.

Under scrutiny themselves, and with old foes and enmities re-surfacing, how long will Carrigan and Miller have to find out the truth behind what these two women have been subjected to?

However, that is a subplot that takes away from the main investigation into the murders that happened at the Bayswater hostel. As usual, Carrigan and Miller develop their own theories behind what they think happened and investigate the facts as they feel they lead. However, the head of the department, Superintendent Branch, believes the enquiry needs outside psychological help and therefore insists that a profiler be added to the team. Unfortunately, the one assigned is a person that Carrigan has a terrible personal history with.

Carrigan and Miller, separately pursue different leads to save resources and it is very intriguing how each fact in the case in unearthed and how apparently unconnected details do eventually come together. They explore a lot of data and I particularly enjoyed the forensic intensity of this, which is normally skirted around in other books. The interaction of Carrigan and Miller is also interesting and of course there are tensions there as the chemistry between the two who spend many hours in each other's company can be problematic. Still it all comes to a most satisfactory conclusion and all the loose ends are eventually tied up. This is a very cleverly plotted book which I found most enjoyable. It was one that once you start it is very difficult to put down.

I'm really disappointed that the author doesn't release his books with the frequency of other mystery authors as the quality of the research and detail and sheer readability of his stories is really to be envied by many other less gifted writers. I just could not put this really gripping story down. Please Stav, don't leave it four years before the next Carrigan and Miller story comes out. I cannot recommend this book highly enough.