Review: Zen and the Art of Murder by Oliver Bottini tr. Jamie Bulloch 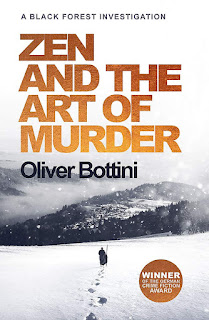 She leaped up. “I don’t booze, for Christ’s sake!” The sentence resonated in her head, just as the footsteps crunching in the snow had echoed the night before. I don’t booze.

Saturday morning, Liebau, Germany.
It’s snowing. Hollerer glances out of his kitchen window just as a shaven-headed monk, dressed only in dark robe and sandals, appears out of the driving snow and makes his way along the street. A vision sent by my wife, Hollerer thinks. Some time later he recalls that the monk had been bruised about the head – perhaps not a vision. He buttons his police uniform over his paunch, fetches his service weapon from the bedside table and sets out to find the monk. At the steps of the village church a crowd including the mayor are gathering around the young man sitting cross-legged and silent, his bowl in front of him. The villagers are unhappy and want him gone. No begging is allowed after all and he could be just a forerunner for other cult members to come. Hollerer buys food for the monk who, by gesture, insists on sharing it with him. For now, annoyed by the mayor’s insistence that he do something, Officer Hollerer retreats.

Saturday morning, Freiburg.
42-year-old Kripo detective Louise Boni wakes up to snow. She hates it. Everything bad that has happened to her has happened in the snow. Her boss rings to call her into work but she refuses. His next phone message threatens disciplinary action and Louise takes her time calling back. Something strange is happening in Liebau, no-one else is available so Louise must go and take a look. Too hungover to drive, she takes a taxi and by the time she arrives in Liebau the monk has left – with Officer Hollerer following him in a patrol car. A young patrolman, eager to display his own “rally-driver” skills, gives Louise a lift to where Hollerer is parked in a white wasteland watching a black dot moving slowly up a hill. Louise and Hollerer follow the monk on foot but soon the overweight policeman reaches his limit. Louise borrows his gun, continues alone and eventually catches up with the monk. They walk in silence and later, helped out by supplies of food and warm clothing ferried by Hollerer and the young patrolman, Louise and the monk enter the forest where they shelter for the night. She establishes that he is Japanese and can understand English but he remains largely silent. Louise, caught up in alcohol-fuelled thoughts and haunted by images of her dead brother, divorced husband and the man she killed, eventually sleeps – waking to the grey light of dawn and the sound of a man’s voice. The monk is wide-eyed with fear, gesturing for her to follow him. They hide until full daylight when the monk resumes his journey.

Louise hands over the task of following him to the day shift, Hollerer and a colleague from Freiburg. The young Liebau policeman drives her back to the Freiburg headquarters. The ensuing argument with her boss is fierce. Louise wants back-up, cars and a helicopter. He wants her on enforced sick leave, “rehab” and a planned return to a desk job. In fact he insists that calls for back-up and helicopters based on “the hallucinations of a piss-head and the wanderings of a half-naked foreigner” are out of the question. Louise returns to her desk and asks her new Liebau colleague to start compiling a list of the nearest Buddhist institutions. Her boss interrupts and orders her home: “You’re on sick leave”…

ZEN AND THE ART OF MURDER is the first novel in Bottini’s "Black Forest Investigation" series and won a Deutsche Krimi Preis when it was published in 2005. Full of psychology and a wry wit, this story deals in the dark matter of child trafficking and murder. Louise is shut out from the official investigation, but stubbornly continues to prise open the riddle surrounding the terrified monk and his pursuers. But not before another death in the snow has shattered her fragile state. In Louise Boni, Oliver Bottini has created a convincing anchor – a woman flailing around amidst the clink of empty bottles; keeping a desperate grip on her self and her career through gut instinct and persistence. In fact Louise’s interior life provides almost as much suspense as that of the hunt for the killers. Bottini’s well-written characters bring humanity to the events and the story reads smoothly in Jamie Bulloch’s translation. This edition includes a short story prequel which fills out the details of the previous case that still haunts Louise.

Greatly recommended, particularly for lovers of the uphill struggles of the lone detective. A classic Nordic Noir set in the snows of a German winter.