Review: Those We Left Behind by Stuart Neville 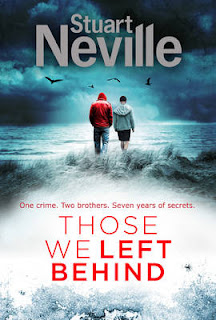 Belfast, 2007
The two brothers huddle together on the bed, their hands bloodied. Ciaran asks his older brother Thomas if they are going to jail. Throughout the hammering and shouting at the front door and the sound of the approaching siren, Thomas's voice soothes Ciaran as they lie together.

Belfast, 2014
As soon as she sees the headlines screaming the release of the “schoolboy killer”, Probation Officer Paula Cunningham knows that the case will fall to her. Ciaran was imprisoned for murder at the age of twelve, his older brother Thomas released two years ago. Both boys' names have been released to the press. At nineteen, Ciaran Devine will have no idea how the outside world works.

Meanwhile DCI Serena Flanagan's first day back at work after her cancer treatment is one she has been dreading: the stares, the whispers, the pussy-footing. As she repositions the photos of her husband and two children on her desk, her boss enters with a file under his arm. Serena's heart sinks to find it is a clear-up job on the cases belonging to a retiring DCI but her boss reminds her that it is early days yet in her return to work. He pauses on the way out to pass on the message that the Devine boy's probation officer would like to speak to her.
Serena remembers Ciaran: a boy, a child. How she had gained his confidence but struggled with the facts when he confessed. And the letter that he had sent to her from prison. The letter that made her blush and that she had kept. Talking to Paula Cunningham, Serena also recalls the horrendous crime scene, the body of the boys' foster father in the corner of the master bedroom, the brothers lying on the bed. At the police station, Ciaran – thin, bearing the scars of self-harm – asked to see his brother. When she explained that he could not, she saw the panic in his eyes. He began to weep uncontrollably and she did what any mother would do and put her arms around the boy, comforting and rocking. Later, at the formal interview with a social worker observing, Ciaran made a full confession, stating that his older brother had tried to stop him but couldn't. Serena suspended the interview. She knew the brothers' stories would match....

Stuart Neville's latest book is signalled as the start of a new series featuring DCI Serena Flanagan. Serena first appeared in THE FINAL SILENCE – as one of DI Jack Lennon's adversaries. And I do hope we will read more Jack Lennon in the future. As with all “good” police protagonists, Serena has her own ambiguities not least the stubborn strength of her own feelings. (But where would we be without stubborn police detectives?) In THOSE WE LEFT BEHIND she not only struggles with her memories of Ciaran Devine and his shocking confession but with the double suicide of a friend and her husband. But she is not in charge of the suicide investigation and her subsequent “meddling” does not endear her to her boss. Character is something that Neville does very well and Paula Cunningham, the probation officer, convinces well – a hard-pressed worker who is perhaps close to burn out.

But the true chill of THOSE WE LEFT BEHIND lies in Neville's laying out of the Devine brothers' relationship with an empathic and devastating precision that had me flinching from what might yet come. Neville's work can be chilling but in this book he explores new territory. This is not the supernatural shiver that occasionally enters the “Jack Lennon” books. Nor the wintry brutality of old terrorists turned crime bosses. This is a full-on psychological ice, a dreadful, intimate study of two brothers, the youngest of whom confesses to a brutal killing as a twelve-year-old and whose release into a world as rushed and unforgiving as the one that nurtured the brothers spells disaster for those who cross their path. I have admired all of Neville's previous thrillers – including RATLINES, his departure into a political faction, thriller-land of 1960s Ireland as haven for fascist war criminals. But this latest book displays Neville's grasp of psychological suspense and reminds me of Scandinavian crime writers such as Mons Kallentoft, Karen Fossum and Henning Mankell. Don't let me muddy the waters of Northern Irish Crime writing however. Just read this book. And whilst it keeps you in fear and suspense – appreciate how beautifully it is written.

Labels: Lynn Harvey, Reviews, Stuart Neville, Those We Left Behind