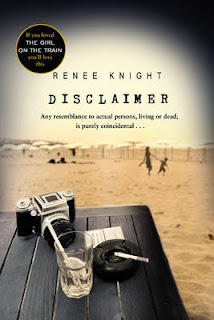 DISCLAIMER is a highly assured debut novel with a cracking premise. Middle-aged wife and mother Catherine has moved into a new house, when she idly picks up a book that she doesn't recall buying. Catherine suffer many sleepless nights of anguish due to reading the book. As this book doesn't abide by the conventional “disclaimer” that it isn't intended to resemble any real life person. Although the names have been changed, the novel depicts a sequence of events that Catherine has tried hard to forget, and has kept secret for decades, even from her husband. Catherine struggles to cope with this intrusion into her life, and desperately tries to hide her worries whilst she investigates who on earth could have written this book, and left it at her house.

On paper Catherine seems to have the perfect life; she has a successful career as a crusading journalist/documentary maker, a loving high-earning husband and a grown-up son. But Catherine struggles to carry through her confident professional façade into her domestic life. She has long had a troubled relationship with her twenty-something son, Nicholas. Robert has a superficially better rapport with Nicholas than Catherine; he is a workaholic lawyer who secretly looks down on Catherine for preferring to work and have a nanny during Nicholas' childhood.

Meanwhile we see events from the point of view of the man who deposited the book at her house, Stephen Brigstocke, starting two years before the beginning of this book. Brigstocke is an elderly widower and failed author with an absent adult son, so lonely that he clings to his late wife's clothes and belongings for solace. He was a teacher who retired before he was fired from his private school after accusations of cruelty towards his pupils. He is determined to wreak revenge on Catherine for an unspecified wrong, and has spent the last few years calculating how best to hurt her, seriously considering pushing her under a Tube train. Brigstocke's manoeuvres cunningly exploit the fault-lines in Catherine's family relationships as he continues to stalk her.

DISCLAIMER is at heart the tale of two families and the ripple effects of a chance interaction between them, which have the potential to affect relationships decades later. Knight continually challenges our perceptions of the main characters, and the stories they have told themselves to allow them to survive their hardest moments (it is no coincidence that both the main characters are writers). The author manages to shade in the nuances of the situation that motivated Stephen Brigstocke's intrusion into the life of Catherine and her family, and make the reader care about both Catherine and to an extent Stephen Brigstocke, despite their rather prickly, brittle natures. I found this a remarkably well written page turner, as much a meditation on parenthood and grief as a traditional crime novel. I very much look forward to further books by this author.