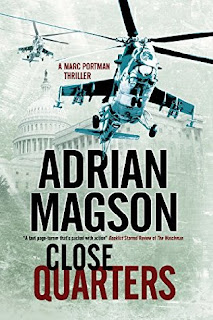 Marc Portman, who works as a freelance close protection specialist for Government Agencies such as MI6 and the French Foreign Legion has just completed a successful operation in Iran for the CIA and is rehired by them to go to Ukraine for another mission.
Here he has to locate, identify and rescue an American diplomat who is being held by Russian separatists. The CIA has undercover operatives in the country who are able to provide 'safe houses' to shelter the diplomat from his pursuers but obviously they are putting themselves at great risk.

Mark is able to enter the country, in disguise and is soon able, over the course of a few days, to identify the location where the diplomat is held under close guard. With great difficulty he manages to release him and soon both he and Marc are hunted animals who must be caught and it is the tension here that the author successfully puts across that provides most of the action in this very highly plotted and gripping story.

This very exciting and hard to put down thriller rushes on to its final dramatic conclusion. I have had the privilege of reading for review purposes the author's earlier Marc Portman story THE WATCHMAN, and his NO KISS FOR THE DEVIL in his Riley Gavin series and two of his Lucas Rocco stories set in provincial France during the early 1960s: DEATH ON THE MARAIS and DEATH ON THE RIVE NORD.

Adrian Magson is a very experienced author with a large number of books published under his name and other pen-names. When you open one of his books you know that you can count on a really interesting plot and well rounded characters, that has been thoroughly and painstakingly researched. That there is a real sense of action and a very dramatic page turning suspense almost to the last sentence.

I look forward to reading more gripping adventures of Marc Portman and in fact any new books by this very exciting author. Very strongly recommended.