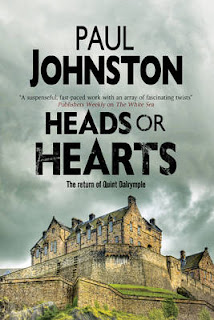 This is the sixth novel in the series of novels featuring Quint Dalrymple and the first new novel for fourteen years.

The Year is 2033. The United Kingdom, along with most of the world, was torn apart by civil wars and criminal gangs in the early years of the twenty-first century. Edinburgh, in the last free election in 2003, voted in the Enlightenment Party (a small grouping of university professors) who, with a mind-set influenced by Plato, guaranteed basic human rights such as work, food and housing but removed most elements of choice from people's lives. Crime has been pushed underground where it is fed in part by envy of the tourists who come for the year-round festival with its legalised gambling, prostitution and drugs just for the them.

Quintilian Dalrymple was a senior policeman in the City Guard who was demoted for his authority issues to work as a labourer, which is where we meet him at the start of the first book, BODY POLITIC, but he handles missing persons' cases in his spare time. He is an intellectual hard-boiled detective who doesn’t like the use of violence but tolerates it as a means to an end.

Now a referendum is looming to reform Scotland from its disparate elements – a quasi-democratic Glasgow, a quasi-monarchy in parts of the Isles and other systems elsewhere.

At the start of HEADS OR HEARTS, a human heart has been found on the football pitch at Tynecastle, rather appropriately the home of Heart of Midlothian Football Club. Quint Dalrymple is called in and the body count goes up before he uncovers a link to the planned referendum.

There are two big issues that have to be addressed here first in a review:

Yes, this is a mix of science fiction and crime fiction in that it is set in the future but there is very limited technology which is entirely lower-level than what most people have access to today with the computers in particular seeming quaintly archaic.

The second issue is can you start the series here? I think that you can start here, as there is enough back-story sprinkled throughout the first few chapters to give you both an overview of the milieu and a view into the mind-set and motivation of Quint, without it dominating the plot.

The plot itself is engaging and does go along at a rate of knots and you can understand the motivation of the characters whilst not agreeing with them - a key driving force is the camaraderie between Davie (his sidekick in effect) and Quint which has been built on throughout the series. The denouement does make sense given what has gone before and sets up the scene for future books.

The one slight downside is that Quint does tend to make allegations before he has the evidence to justify them which one suspects would have got him removed from the case quite early on in the novel, given the borderline dictatorship nature of the regime for which he reluctantly works.

This is a good addition to the series and I would definitely like to see where Quint Dalrymple goes from here.