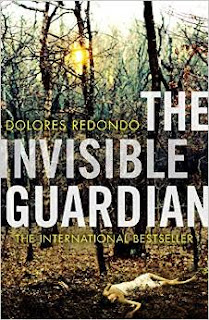 THE INVISIBLE GUARDIAN by Dolores Redondo (translator Isabelle Kaufeler) is the first in her best-selling trilogy of novels set in Navarre. These books feature young female detective, Police Inspector Amaia Salazar, who had a traumatic childhood in the beautiful historic small town of Elizondo. The literal meaning of the name Elizondo is “beside the church” , which proves to be a rather apt meaning as quite a few of the characters in this book hold pagan and magical beliefs or believe they have seen supernatural creatures. After leaving home to study at university, Amaia now lives in Pamplona and has a successful police career and happy marriage to her husband, an American sculptor from a wealthy family, with the only fly in the ointment being concerns about her fertility. But then Amaia is sent back to Elizondo to head up the murder investigation after the particularly nasty ritualised murder of a young girl, Ainhoa Elisazu, whose body was found by the riverside in the woods.

Amaia soon discovers that there is probably a serial killer at large near her home town. A girl in her late teens had been found dead some months before after a drug-fuelled row with her boyfriend, and the police had wrongly assumed that the boyfriend was the culprit. But Amaia soon finds out that there are a number of similarities with the death of Ainhoa, and the boyfriend was almost certainly unfairly imprisoned. The forensic reports in Ainhoa's case reveal some puzzling information, that mysterious animal hairs were found at the crime scene. Events taken an even stranger turn when a sighting by a forest ranger spark rumours that a basajaun was present in the forest around the time of the murder. (A basajaun is a creature from Basque mythology, a giant human like hairy creature that is reputed to protect animals in the forest.)

Amaia has to face up to a number of family troubles past and present on her return home, having been cast since childhood in the role of the family scapegoat in the eyes of her mother and older sister Flora. Amaia has a better relationship with her other sister,. Rosaura, who is reeling from a recent split with her ne'er do well boyfriend, Freddy, but this sisterly relationship becomes strained during the course of the investigation. Flora is an overbearing bully who has taken over the family baking business, and made a huge success of it, with book and television deals in the pipeline. Despite this success Flora is bitter as she perceives that Ros and Amaia escaped the responsibility of the business. The burden of her past weighs heavily on Amaia as she investigates this case, and has to battle to gain the respect of some of her male colleagues whilst having painful flashbacks to her childhood

I found that THE INVISIBLE GUARDIAN has an intriguing take on the police procedural, moving beyond the gory details of crime scenes and office politics typical of the genre. What is particularly distinctive about this book is the way the atmosphere and the local mythology of the Basque region play such an important part in this story. Amaia is an interesting heroine, whose unfeasibly good detective skills are shown as being the result of the combination of her talent at conventional detective work with a witch-like intuition. The back-story and at times strained relationships between Amaia and her sisters was convincingly depicted. At times though I found the writing a bit overwrought and a little too determined to show Amaia's intellectual and professional superiority compared to her colleagues. Otherwise THE INVISIBLE GUARDIAN is a striking debut, and I would be interested to read future books in this series.