Review: Aunt Dimity and the Wishing Well by Nancy Atherton 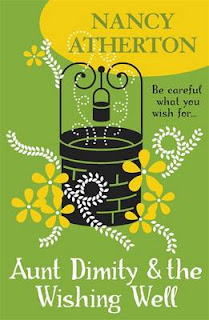 
I read the first book in the Aunt Dimity series, AUNT DIMITY'S DEATH, close to its release date in 1992. Like many, many, readers I was charmed by the book. The details of the plot are vague in my mind but I remember well the warm fuzzy feeling I got from reading it. The first book, introduced Lori Shepherd, a somewhat down on her luck young American woman who via a fairy tale-like story orchestrated from the grave by Aunt Dimity, ends up with a house and a husband in the small village of Finch in the Cotswolds.

Twenty years later and there are now twenty books in the series, with AUNT DIMITY AND THE WISHING WELL, being the nineteenth.

Lori and her lawyer husband Bill, a fellow American, have eight-year-old twins. Bill has his office in a house near the village green and Lori looks after their cottage and children, and helps out around the village. The book opens with the funeral of Finch's most reclusive resident Hector Huggins. As he appeared to have no family, the funeral is only attended by the villagers – giving Lori a chance to introduce them to new readers – until at the last moment a young Australian turns up: Jack MacBride, Mr Huggins' nephew.

Jack is staying in Finch whilst he puts his uncle's affairs in order and prepares his uncle's home, Ivy Cottage, for sale. Lori and Bree, a young New Zealander, offer their help in tidying up the garden. Jack makes a discovery in the back garden – a wishing well. When Lori's wish for it to stop raining comes true, the villagers are soon queueing up to make their own wish!

And when more wishes come true, Lori begins to feel that more than coincidence is at play. But how are these wishes coming true?

Lori's sounding-board is Aunt Dimity – who “speaks” to her via a special journal – Dimity's words appear on the page in response to Lori's spoken words. Dimity advises Lori that someone's going to get hurt if all these wishes come true and she should investigate…

I have to say that AUNT DIMITY AND THE WISHING WELL is not a crime novel as nothing criminal takes place but it is certainly a mystery novel as it's quite a puzzle as to how someone could orchestrate so many things and also the identity of that person. There is also some romance and the local gossip makes it feel like you're stepping into a long running soap opera. However you categorise it, as long as you're not expecting blood and gore or even a murder, then this should provide a few hours entertainment, with its gentle nature and its genteel environment and occupants.

Incidentally, the American author does well with her use of British English for the supporting cast, with only a few slip-ups eg bugs for insects.

I regret waiting twenty years to continue reading the series so I have been ordering some earlier books and I also, ahem, have a few on my tbr already.

First published in the US, Headline have now published some of the latest books. Plus they are all available as ebooks. Some of them may be in the 'Large Print' collection at your public library.
Posted by Karen (Euro Crime) at 1:19 pm

I'v enjoyed the books in this series and am glad to see they are still continuing.

Yes, no. 20 is out. I think I'll work on catching up with the earlier books and wait for its paperback release.

I don't read the various paranormal books of any author and so can someone tell me which of the Aunt Dimity (besides the Paranormal Detective)are such so I can gather the 'normal' ones? I too read many of the first books as the came out, loved them, then got into reading procedurals and internationals--I have since returned to the pleasures of the cozy and Aunt Dimity's charm. BUT I need help to avoid purchasing the ones that are of the paranormal bent. Thanks.