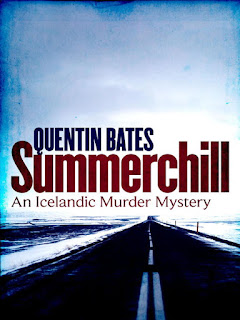 I knew I was in for a treat as soon as got my hands on SUMMERCHILL. I am big fan of Gunnhildur (Gunna) Gisladottir, the down-to-earth and determined Icelandic policewoman with a sense of humour who feels more at home in her small provincial town than in Reykjavik where she is employed. And this time, at the end of the hot summer she and her sidekick Helgi work particularly hard to find out how the alarming and unsettling events around the city might (or not) be connected.

Meanwhile in the countryside the carpenter Logi toils away at the building site during the day and returns to his flat in Reykjavik in the evenings. When he finds a gun hidden under the floorboards his first thought is to keep it a secret until there is an opportunity to sell this unusual find. While pondering about his next move Logi half-heartedly agrees to help his former brother-in-law Danni to complete another building job: tax-free cash and a 'no questions asked about anything' type of contract from some ruthless customers. But Logi has huge financial commitments and so decides to continue, regardless of starting to feel slightly uneasy… Then an unexpected visit from an extremely unpleasant debt collector results in Logi skilfully using his tools. A body needs to be disposed of. Logi asks his friendly Polish workmates for a favour, and they are helpful and efficient, as always.

SUMMERCHILL, published only as an e-book, a novella, about a half of the length of a standard book, suits the story very well. There is an urgency in Gunna and Helgi's actions as they try to make sense of the strange and apparently unrelated events which elude them. The settings in Reykjavik and in the countryside lend themselves to the book’s structure. The time-frame of several days fits with Logi's and the police' thinking.

There is murder and there is violence; Gunna's frustration, and the investigation which isn’t going quite right, and the excellent portrayal of a small chunk of the Icelandic underworld. However, the mood of SUMMERCHILL seems fairly relaxed compared to other books by Quentin Bates. The story moves fast and it never loses its momentum. Definitely a noir story, with a summer twist, with an expectation of cold, snow and long dark nights, but also with an undercurrent of fun.

The finale of the story is a surprise. Logi wants to escape from two unhappy women, his mounting debts and the shady characters following him, and from the police, just in case... I don't wish to give away the ending but for me it was a really unexpected scenario, demonstrating the author's excellent perception of people’s motives, and his sense of humour. Read SUMMERCHILL, you'll love it.

I too enjoyed this novel. As the story unfolds, one's dismay regarding Logi's seemingly amoral character is transformed into a kind of admiration of his spontaneity and lack of guile. He is a study in relative goodness compared to the depravity of his adversaries. I soon was on his side; hoping he would elude both the police and the low lifes that just would not leave him alone. A great read!