Eliza Doolittle and Henry Higgins make their detecting debut in November in Wouldn't it Be Deadly by D E Ireland, published by St Martin's Press: 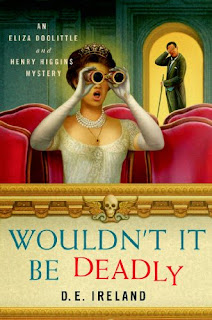 Eliza Doolittle and Henry Higgins make an incomparable pair of sleuths in the start of a delightful new series.

Following her successful appearance at an Embassy Ball--where Eliza Doolittle won Professor Henry Higgins' bet that he could pass off a Cockney flower girl as a duchess--Eliza becomes an assistant to his chief rival Emil Nepommuck. After Nepommuck publicly takes credit for transforming Eliza into a lady, an enraged Higgins submits proof to a London newspaper that Nepommuck is a fraud. When Nepommuck is found with a dagger in his back, Henry Higgins becomes Scotland Yard's prime suspect. However, Eliza learns that most of Nepommuck's pupils had a reason to murder their blackmailing teacher. As another suspect turns up dead and evidence goes missing, Eliza and Higgins realize the only way to clear the Professor's name is to discover which of Nepommuck's many enemies is the real killer. When all the suspects attend a performance of" Hamlet" at Drury Lane, Eliza and Higgins don their theatre best and race to upstage a murderer.

Also from the blurb on amazon: "D.E. IRELAND is a writing team of two Michigan authors who met as undergraduates in an anthropology class and have remained friends ever since. Both are married to computer geeks, and each has one beautiful and brilliant daughter. Lifelong book lovers and history buffs, they have authored several novels on their own".
Posted by Karen (Euro Crime) at 4:52 pm

This is an intriguing premise!

Thank you! My writing partner and I had fun writing this book, and book 2, Move Your Blooming Corpse coming out next year. Wouldn't It Be Deadly is available for pre-order on Amazon and B&N!