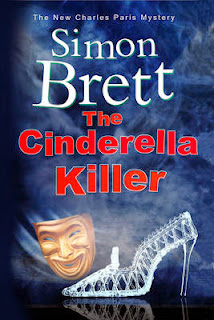 This is the nineteenth of the Charles Paris novels by Simon Brett and is published only just over a year after the last one, A DECENT INTERVAL so hopefully we will get these more regularly now – please!

Charles Paris is shockingly in reasonably long-term paid work albeit as one of the Brokers men in a performance of Cinderella in Eastbourne where he is so far down the bill he is amazed that he makes it on to the poster at all.

The big name of the show, as Baron Hardup, is a faded American sit-com star, Kenny Polizzi, who knows nothing of pantomime and is here almost entirely for the money although escaping his soon-to-be ex-wife proved an added incentive. She arrives in the country, Kenny goes off the wagon and soon he is found by Charles underneath the pier – no longer so full of life - having been shot.

As usual I read this very quickly as I do for most Simon Brett books. Personally I feel that both the murder aspect and the comedy aspect are much better handled in this one than in A DECENT INTERVAL. On the murder aspect, the killer is not that obvious although when revealed it does make total sense and in the comedy aspect, there are some great one-liners (the chapter sub-titles are also very funny if you know the traditions and running gags of Panto).

The best news for those of us who like Charles is there is a hint of sunlight in his relationship with his wife Frances. I am now just waiting to see what the next Simon Brett is to pre-order but will re-read some earlier Charles Paris stories in the meantime.