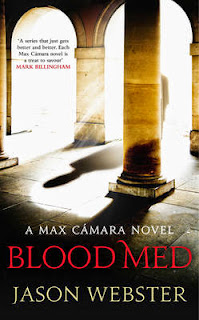 Police Headquarters, Valencia, Spain.
The television in the Murder Squad room is tuned to the news of the King's health crisis. This is the worst of times for Spain: unprecedented economic chaos, the country close to bankruptcy and the King close to death. If he dies the country could tear itself apart. Maldonado, the squad's new chief, calls detectives Camara and Torres into his office. He introduces them to CI Laura Martin, head and sole member of the Sexual Violence squad. There is no love lost between Camara and Chief Maldonado, nor for that matter is there any love lost between the chief and the entire squad. But now, after some months with no suspicious deaths, there are two to look into. Torres will investigate what looks like the attempted suicide of a bank worker; the man is as near dead as possible so they might as well get a head start on the case. Meanwhile Camara and Martin will take the brutal killing of a young American woman, her death called in by her young husband. Maldonado calls Camara back for a private word and wastes no time giving him the message that the powers that be are looking to get rid of one of the team. Back in his old job in Valencia after several months of extended leave, Camara immediately gets Maldonado's drift. But he is also distracted by trying to work out if the Rolex on his boss's wrist is genuine or fake.
At the young couple's apartment door, Camara can smell the blood. Forensics are still processing the scene. In the living room a coffee table is covered with newspapers and magazines and a book about blogging lies on the sofa. But the young woman's body is in the dining room – where the floor is awash with blood. The girl lies face down, her skull a bloodied mess from the five shots fired into it, her pants bunched up under her dress. Laura Martin asks where the husband is – and is on the move before the answer is out. She is sure of the culprit. She has seen it all before...

BLOOD MED is the fourth in Jason Webster's series featuring Valencia's motor-bike riding, anarchist detective Max Camara. It sees Camara back at work in Valencia's police headquarters and living with his journalist girlfriend Alicia (now out of a job) and his elderly grandfather, Hilario. The book pitches us into a Spain in political and social chaos: rising unemployment, the consequent homelessness of people failing to make mortgage repayments or pay their rents, banks blamed and hated. Corruption further divides and disillusions a society which is splitting – polarised between rich and poor, left and right, regional separatism. It is a scenario now familiar to us, not just with Spain but also with contemporary Greece. Some crime fiction readers don't want the political stuff, but I like the insight that Webster brings into the consequences of economic breakdown on the lives of ordinary people. His writing is vivid and on occasion moving. Whilst the centre of the plot is a thrilling crime story (unconvinced with the young wife's violent death that “the husband did it”, Camara pursues other motives for her killing) Webster also lodges Camara firmly in the centre of his life. We have crimes to be solved but we also have Camara's relationships and life outside of his detective work, for instance his involvement with an anarchist refuge for immigrants and the homeless down in the tunnels of the new metro (another failed project, unfinished due to the financial collapse of the region). The result is punchy and rich – an absorbing crime thriller, full of suspense and excitement.

I enjoyed THE ANARCHIST DETECTIVE, his previous book in the series and BLOOD MED continues its high standard. Jason Webster has lived in Spain for many years and just as much of Nordic Noir takes note of society and social change in its crime writing so does Webster – but the flavour and the history is distinctly Spanish. I hope to backtrack to earlier books in the Camara series but meanwhile I thoroughly recommend BLOOD MED.


Read another review of BLOOD MED.