The Return of Albert Campion

Lord Peter Wimsey has had a new lease of life thanks to Jill Paton Walsh, Poirot lives again in Sophie Hannah's as yet untitled novel due out in September and now Albert Campion reappears thanks to Mike Ripley. 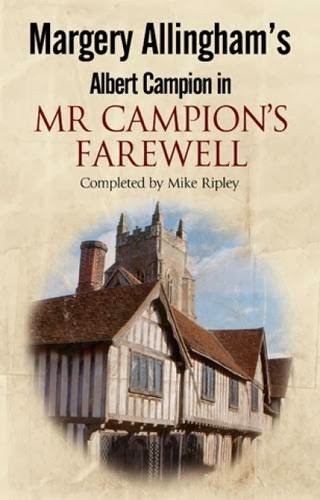 Published in April by Severn House is Mr Campion's Farewell which was begun by Margery Allingham's husband Philip Youngman Carter and finished by Mike Ripley.

"Youngman Carter left only the first four chapters, which introduced a whole load of eccentric characters behaving suspiciously in an old Suffolk wool town. There was no indication where the plot was going or how it would be resolved, so in one sense I was given a free hand. My advantages were that the Suffolk town seemed (to me) to be clearly based on Lavenham, which I know, and of course, I had Albert Campion there to sort everything out. With a character that good - and the help of the Margery Allingham Society - everything fell joyfully into place, or at least I hope it did!"
Posted by Karen (Euro Crime) at 9:00 am