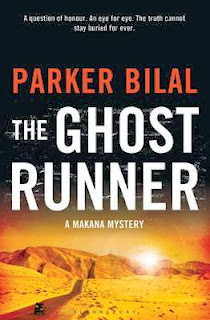 Cairo, 2002
Stuck in city traffic, Makana studies his target's Bentley. Mrs Ragab, convinced of infidelity, has been paying Makana to follow her husband, a wealthy lawyer. But after a week of tailing him, Makana still has nothing to report. Tonight, however, he follows the lawyer to a private clinic and then to a room where a young woman lies inside an oxygen tent, unrecognisable, her skin charred black by her extensive burns. Her wristband says "Karima Ragab". But the Ragabs are childless. Is this Ragab's daughter by a previous marriage? Mrs Ragab is shocked by Makana's discovery of Karima but denies any possibility that her husband has a child from a previous marriage and ends the assignment, asking for the bill. However the girl haunts Makana, entwined with thoughts of his own daughter – lost with her mother when their car went through a bridge parapet as the family tried to escape from Sudan many years before.

Makana is surprised to receive a visit from Ragab himself. Karima has died. Ragab explains that although not his daughter but that of a client who came out of prison a Jihadist and had left the country, Ragab has known Karima and her mother all of Karima's life. He has always tried to help them. The mother died two years ago and when this dreadful fire happened Ragab got Karima into the private clinic for treatment under his name. The doctors think that her death was suicide but Ragab suspects murder and Makana is inclined to agree. In fact Ragab suspects Karima's father of engineering some kind of honour killing of his own daughter, thinking her to be Ragab's child. He wants Makana to find out who really killed Karima and Makana agrees to take on the case. He meets Zahra, a women's rights activist and friend of Karima. She has an impact on him that he cannot shake off, even when he leaves Cairo for the oasis town of Siwa, Karima's parents' home town, where he is convinced that he will find the answer to who killed the girl and why.

THE GHOST RUNNER is Parker Bilal's third outing for Sudanese ex-policeman and exile, Makana. The story is set shortly after 9/11 in the international political climate of the West's “war on terror” with growing political protest in Cairo's streets. However these are not the anti-Mubarak protests of the Arab Spring, these are pro-Palestinian demonstrations, reactions to the Israeli siege of Yasser Arafat's Ramallah headquarters.

With each “Makana Mystery”, the tone of Bilal's writing becomes a little starker as it focuses on the social and political issues of Makana's adopted city of Cairo. Parker Bilal (pseudonym of British-Sudanese writer Jamal Mahjoub) creates enduring character portraits; taxi-driver Sindbad, journalist Sami Barakat and the ambiguous and vain Inspector Okasha all reappear from the earlier books. Whilst in the desert town of Siwa, Bilal creates a moving character portrait in Doctor Medina, a haunted soul who distils his own alcohol and entrusts his lovingly repaired Norton motorbike to Makana. As for Makana himself – he grows more established with each book: the man from the South, the outsider inhabited by his past, the shrewd, compassionate observer with a dry wit. And there is something magical (some might say fantastical or downright impossible) about Makana's survival feats, largely sustained by tobacco and persistence.

In THE GHOST RUNNER Bilal writes memorable descriptions of the city and its street life alongside the contrasting life of the oasis town and the desert itself but if I have placed too much emphasis on this book as a glorified travelogue, I apologise. It is enthralling crime fiction and Makana emerges out of this complex story of duplicity and damage as he does out of the desert – exhausted, tattered, spitting sand, but just about upright. I remain his devoted fan and wait eagerly to find out what will come next for him. Absolutely recommended.