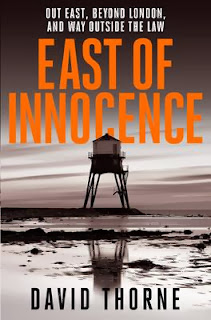 This superbly written book is the debut novel for David Thorne. It is the first in a series to feature his protagonist Daniel Connell, a former city lawyer who has set up his own practice and is full of simmering anger, as well as being loaded down with baggage from his shady past. Thorne has set his book in Essex. He doesn’t say exactly where in Essex, though – and the effect is to make the county a rather dark and foreboding place. Having roots in Essex myself I found this to be particularly attractive, as having a rough idea of where things are happening, but not being entirely sure, is both frustrating and delightful!

In short, Daniel is struggling to make a go of his business after his disgraceful exit from a top City law firm. When an old school friend is beaten up by the police and wants Daniel to help him, his initial reaction is to keep well away but he gets dragged into it all the same and ends up losing part of a finger for his troubles. Then, when things really couldn’t get any worse, he is threatened into doing some dodgy work for a local gangster, after insulting the guy at a party. Far from happy, Daniel goes to visit his dad, a somewhat infamous local criminal, who really doesn’t like him, and ends up in even more trouble when he asks about his mum. Mum disappeared a few months after he was born and he has never known her. Eventually he ends up with some shreds of information on who she was and he sets out to find her, trying to leave the rest of his troubles behind for a few days. Only troubles have a way of finding you and Daniel must move fast to stay ahead of the game, and find out the answers to all his questions, before his pursuers catch up.

David Thorne is an established writer, having been involved in TV and radio comedy as well as advertising for the last 15 years. He has received acclaim for his previous work and the TV rights for this book series have already been sold. His debut novel is nail-bitingly exciting as well as dark and gritty. He is clearly an author to watch for in the future and I am really looking forward to reading the next in this series.