Not Euro Crime but I couldn't resist this one on Netgalley! 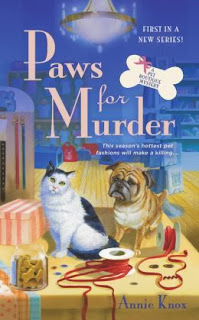 PAWS FOR MURDER is the first in a new series from Annie Knox, who also writes as WendyLyn Watson, and introduces Izzy McHale, her pets Jinx and Packer and her new store, a pet boutique.

Izzy is living in her small hometown of Merryville in Minnesota. Life has not turned out as expected when she began her higher education career in fashion alongside her soon-to be plastic surgeon boyfriend. After training, they were all set to go to New York and her boyfriend did, only with someone else. So Izzy is putting her life back on track by setting up a clothes shop for pets, many of which she designs and makes herself, and is helped by school-friend Rena.

Not everyone is happy with the idea of the store, including her neighbour Richard Greene, owner of the Greene Brigade, and Sherry Harper, a trust-fund baby whose heart may be in the right place but who shows it in the wrong way. She is an environmental activist and seeker of good causes and thinks it's wrong to dress animals up. She is already credited with having a sea-food restaurant closed down and Izzy is worried Sherry might have similar success with her own store.

Sean and Izzy begin to investigate, to clear Rena's name, and a friendship is resumed, complicated by the fact that Sean has a girlfriend, one who is related to Sherry.

I very much enjoyed PAWS FOR MURDER and it kept me hooked. Though the gorgeous cover shows a cat and a dog it's actually a ferret who provides a clue! I loved the fact that several of the characters were vegetarian and it was not made an issue of, they could eat out easily. We have animals, a touch of possible romance and a puzzle to solve, all set in a wintry small-town where the shops all have cute names – if you like that sort of thing then you should enjoy this. I hope it's not too long a wait until the sequel.

Oh, this does sound like a fun read, Karen! Thanks for sharing. And actually, as someone who used to own ferrets, I'm not surprised at a ferret's ability to, well, ferret out a clue... ;-)