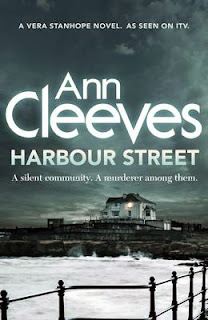 Detective Joe Ashworth is hurrying home with his daughter after a carol service when, due to the snow, the Metro they are on stops suddenly at Mardle, on the outside of Newcastle. They are asked to leave and catch a bus but Jessie is worried that an old lady has fallen asleep and returns to the carriage to shake her awake. Unfortunately she has been stabbed in front of the many passengers, and Joe.

She is identified as living and working at a small hotel in Harbour Street owned by a widow Kate Dewar, with Kate’s teenage children. DI Vera Stanhope is pleased to have a case to absorb her during the insanities of the Christmas season and relishes the challenge.

The dead woman is liked by every one who knew her. A quiet well-bred woman who appears to have fallen on hard times and who helps the disadvantaged and distressed women who find a home at the Haven which is supported by the local church. But as Vera and Joe dig deeper, it is obvious to both of them that there are secrets in Harbour Street and that they are not being told all there is to know about Margaret Krukowski.

Then another young vulnerable women is found dead and a body which has been buried for a long time is discovered and Vera and Joe must bring the secrets into the light to find the truth and the killer.

Vera is an older single woman who uses her intuition and knowledge of human nature to great affect and, it is always a pleasure to read a novel where a woman can be interesting and good at her job, without being sexy, or burdened with the cares of family and children that compromise the investigation. With Vera, we have a detective who just happens to be a woman.

This is an interesting story based in a small declining community. As always with this author, the characters are well rounded. Readers may well know the central characters of Vera and Joe from the TV series and they don't disappoint whether in print or on the screen.