Review: A Song From Dead Lips by William Shaw 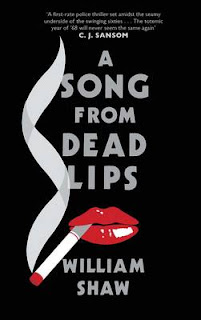 This brilliant first book is not only a police procedural but a modern historical mystery set in October 1968. Marylebone, London CID is where DS Cathal 'Paddy' Breen is stationed. The office banter is very sexist and racist in tone and police corruption is not considered remarkable. Breen is injured during a particular action and consequently he finds it very painful to drive and a very chatty WPC is assigned to him.

This was the time when the Beatles and all news about them was everyday in the newspapers and their records were always been played and analysed for hidden meanings.

DS Breen & WPC Tozer are called to investigate the murder of a young woman found strangled and naked in St John's Wood. The local neighbours that they question suspect that a new black resident is culpable and Breen finds it very difficult to argue against the bigotry that existed at that time. A clue that WPC Tozer identifies, leads them to the West Country and yet more murders.

This very well plotted and historically well researched story comes to a dramatic conclusion in the final chapter. As someone who was around during the '60s it was really memorable being reminded of cigarette brands such as 'Peter Stuyvesant' and shop names that no longer exist and the other commercial trade names of the time. The author really knows how the write a gripping storyline, with well defined characters and I look forward to reading more books about Breen and Tozer. Well recommended.