I blogged about the film, Point Blank, when it was released back in 2011 and it is to be on BBC Four at 9pm on Saturday 31 August. 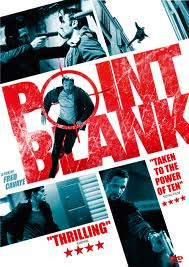 When male nurse Samuel saves a thief, his pregnant wife is taken hostage by the thief's henchmen to make him spring their boss from the hospital. A race through the subways and streets of Paris ensues as the body count rises. Can Samuel evade the cops and the criminal underground and deliver his beloved to safety?


It's also available quite cheaply on DVD.
Posted by Karen (Euro Crime) at 9:00 am

Checked out your earlier post and the trailer... I do believe I shall plonk myself in front of the telly for this one. Thanks.