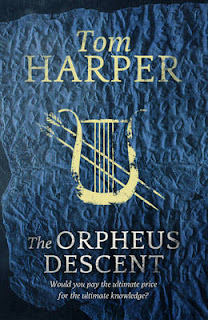 A simply fantastic story! It was so totally absorbing that I zoomed through it in a few days and was most disappointed when it ended. A lovely mix of fact and fiction; Harper has seamlessly blended together the history and philosophy of mysterious Ancient Greece and Ancient Italy with characters from his own imagination and produced a winning combination. Sometimes the reader is left thinking, ‘Why?” or ”Who??” regarding the historical stuff, and there is definitely not enough about Orpheus to satisfy my appetite, but most questions are answered by the end and any that are not can easily be sorted by a visit to Wikipedia – THE ORPHEUS DESCENT is fiction after all, not a history lesson.

In brief, the story alternates between following the adventures of Plato, as he struggles to accept the execution of his friend and tutor, Socrates, and leaves his home to travel to Italy, in search of his elusive friend, Agathon. He is terrified of the sea and his plans are ruined when the ship he is sailing in is wrecked in a storm. Plato is washed ashore with one other survivor and together they make their way in this strange land. Agathon was seeking a mysterious book, so Plato starts to look for it as well, and his adventures lead him to places he could only have begun to imagine before leaving home. A large number of his more famous letters and laws are based upon this life-changing trip. He returns home a different man.

Interspersed with this wonderful tale about Plato is a modern-day story featuring a young archaeologist, Lily, and her husband, Jonah. Lily is in Italy for the summer, at work on a dig, and Jonah is touring with his band. At the end of his tour he drives his trusty van down south to Lily’s dig so that they can go home together. He arrives safely but then disaster strikes. Lily disappears and nobody seems that bothered about it. All their friends, and the police, think that Lily has ended the marriage but Jonah refuses to believe it and sets off to find her. His journey mirrors that of Orpheus, the legendary Greek musician who was destined to be forever in search of his wife in the Underworld. The reader hopes that Jonah will be more successful than Orpheus, but time is running out and his path is far from easy.

If you like tales of Ancient Greece and archaeology then you are going to love this book. There is just the right amount of factual detail; leaving you neither overloaded and swamped nor wanting so much more that the story is incomplete. THE ORPHEUS DESCENT is Harper’s eighth book (as well as three more as Edwin Thomas) and should prove to be at least as successful as his previous work has been. Personally, I loved it!