Review: The Carrier by Sophie Hannah 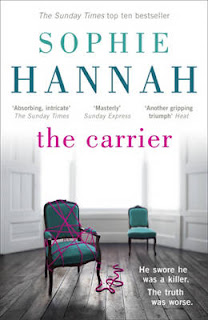 Gaby Struthers is a successful research scientist and entrepreneur, spending most of her life jetting around Europe for business meetings concerning her latest project, much to the annoyance of her partner, Sean. On her latest trip to Düsseldorf, her flight is cancelled and she meets Lauren Cookson, a fellow passenger who is devastated and frightened by the delay.

Lauren clings to Gaby who finds herself reluctantly becoming Lauren's companion on the distressing, lengthy and tiring journey home. Lauren mentions that she knows an innocent man who is accused of murdering his wife, and Gaby is horrified to realise that the man is Tim, the man she still loves, who gave her up to return to his wife, Francine

DC Simon Waterhouse is also not sure if Tim is guilty mainly because Tim cannot or will not say what his motive was in killing his wife. Tim’s friends, Kerry and Dan, have given a home to Tim and Francine after her stroke, and remain very loyal to Tim, backing up everything he says. Simon believes that a lot of information is being kept from him and he involves his team and his wife, DS Charlie Zailer, in his search for the truth, but nothing prepares him for that truth.

This is another compelling read from Sophie Hannah and another outing for Waterhouse, Zailer, Sellars, Gibbs and Proust. The interactions and relationships between these characters is a continuation from previous novels but the book stands alone. If you are looking for a thrilling murder, then this is not the book for you. If you are interested however in what makes people behave as they do and what lengths ordinary people will go to in response to extraordinary events, then you will enjoy this.