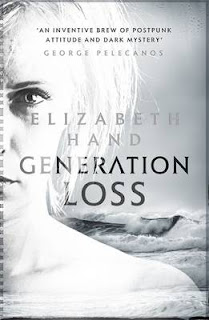 Cass Neary knows she is a mess-up; growing up a loner, the only child of a widowed father, she always saw things differently from others – or rather she saw different things. She took to photography and left to study photojournalism in New York but instead she plunged into the city's 70s punk music scene. In a haze of pills and booze, she lived in the clubs photographing the kids as they took drugs, sex, sleep – overdoses. Still in her teens, she made a series of photos recreating paintings by Munch, Sickert, and Waterhouse. She called the series “Dead Girls” and it got her a gallery show, then a book, and she became a sensation. But she blew it with drugs, drunken interviews, insults and inappropriate come-ons. By her early twenties she had lost it and a bloody rape on a vacant lot in the Bowery put paid to her youth and promise. She surrendered. Cass spent the next twenty years in a miasma of alcohol and drugs, with a dead-end job and her photography limited to the occasional slot in a group show and the odd photo sold to the Soho Weekly News. Now, in her late forties, a dealer friend offers her a job; an interview with reclusive photography legend, Aphrodite Kamestos who is now in her seventies and living on a remote island off the Maine coast. This is Cass Neary's idol, the woman whose art changed her life. Cass says yes. Wearing her standard outfit of leather jacket, designer jeans and steel-tipped cowboy boots, with her only luggage – a satchel containing two photography books by Kamestos, a battered Konica camera, some film and a bag of crystal meth – Cass sets off in a rented car for the sub-zero temperatures of a Maine winter. She arrives that night, too late for the arranged boat out to the island. At the only motel in town she is greeted by a fifteen year old Goth receptionist and a lot of “Have You Seen...” flyers for missing cats and one for a guy called Martin Graves. Over the next few days Cass Neary enters the artist's remote world in all its hostility and menacing beauty. And with her own intuitions and compulsions she opens up the secrets it contains.

Elizabeth Hand is an American writer living in Maine and London. She has been writing and publishing fiction since the late 1980s. Much of her work is in the sci-fi and fantasy genre, including film novelisations and young adult fantasy, and she has two Nebula Awards to her name. She has said that GENERATION LOSS “... began as a fantasy novel and ended up as a psychological thriller.” This explains a structure that is a little uneven with an apparently paranormal incident at the start, in Cass's youth, which somehow fails to resonate. But by the time Cass gets to the end of her journey in Maine I had become totally absorbed in the “psychological thriller” aspect. It is a book about beauty, loss, death and murder but its riveting feature is the central character of Cass Neary; someone I should have disliked in so many ways – but I didn't. I know Stieg Larsson's GIRL WITH THE DRAGON TATTOO is a tired “front cover sticker” comparison but imagine his creation “Lisbeth Salander” twenty years older and without benefit of aims or redemption; wired, amoral, impulsive and detached from relationship. You start to get a picture of Cass Neary. Whereas bad girl “heroines” such as Larsson's “Lisbeth” and Carol O'Connell's detective “Kathy Mallory” funnel their outsiderness and obsessions into digital genius, Cass Neary remains defiantly analogue. She refuses to work with a digital camera; her own obsession and brilliance lying in an intuitive and detailed understanding of the photographer's eye and technique. Perhaps this a first in forensic detection skills.

I enjoyed GENERATION LOSS very much. It is dark, atmospheric and genuinely thrilling. UK publishers Constable & Robinson are due to bring out Hand's second Cass Neary book AVAILABLE DARK later this month and I certainly look forward to it.

I liked this book very much; it was a different touch, unique, with a very flawed protagonist.

It was interesting and I remember I couldn't wait to pick it up when I was doing other things.

However, in my opinion, the series took a dive with the next one Available Dark. Didn't like it at all, full of horrific violence and sadism. The Scandinavian settings didn't help.