Review: Behind the Night Bazaar by Angela Savage 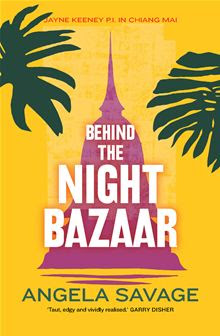 Behind the Night Bazaar by Angela Savage, ebook.

Australian author Angela Savage's third book in her Jayne Keeney PI series set in Thailand, The Dying Beach, has just been released and a special offer is running until the end of July on the ebook versions of her two first books. I first heard of this author via Margot Kinsburg's excellent blog and have had these in my wish-list for a while. The newly sub-£4 price meant I snapped up book one, Behind the Night Bazaar and when I was about half-way through reading it I followed it up with a purchase of book two, The Half-Child.

Jayne Keeney is an Australian expat working as a PI in Bangkok. After a violent encounter with a women she was surveilling, she flees to her best friend Didier who is living in the northern city of Chiang Mai. Didier is her best friend and would be more except that's he's gay. Soon however, Jayne finds she has another case. Two murders plunge her into a world of child prostitution and police corruption, with some bedroom solace from a handsome Australian policeman. Jayne must be careful or she could be the next victim.

Set in 1996, Behind the Night Bazaar was first published in 2006 after winning the 2004 Victorian Premier's Literary Award for unpublished manuscript. Angela Savage's personal and professional experience of living and working in Asia informs her novel and gives it an authentic tone. I enjoyed the cultural aspects as much as the story. Jayne is a character you want to spend time with, she's clever and resourceful and though there are now several other series set in Thailand, few have a woman as the lead character.

If you don't read electronically then the following will be good news, from Angela Savage's blog post 24 June 2013:

For US readers, Behind the Night Bazaar is available in paperback from this month and The Half-Child next month. The Dying Beach will be available in 2014.

For UK readers, all three should be available in paperback in 2014.

You can read the short story which introduced Jayne Keeney, The Mole on the Temple, via a download from Angela Savage's blog.
Posted by Karen (Euro Crime) at 1:43 pm

Karen - So glad that you enjoyed this book :-). I like the Jayne Keeney character very much myself, and I am very much looking forward to The Dying Beach.