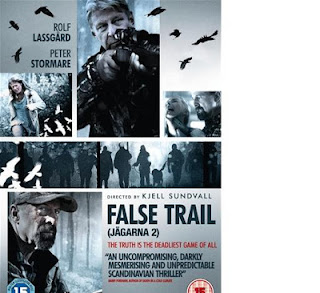 It has taken 15 years for The Hunters (Jägarna) director Kjell Sundvall and its star Rolf Lassgård to reunite for a sequel - False Trail (Jägarna 2).

The film, set in Sweden's Norrland, opens with a hunt being organised. The whole of the community including the police are involved but when the car of a young woman (Elin) is found abandoned nearby with blood in it, the hunt has to be called off. When no trace of Elin can be found, a murder investigation is begun and the local police  are swift to blame first her stalker and then an oddball who has a history of violence and whose fingerprints are found on the car. Erik Bäckström (Lassgård) is sent from Stockholm's National Murder Commission to assist in the investigation and is far from convinced that the police have the right guy and still no body has turned up.

Bäckström is returning to his home territory. His late brother's son Peter, is the stepson of the lead investigator Torsten and as Bäckström becomes more involved with the family he becomes aware that things are not what they seem.

False Trail is an absorbing thriller, reminiscent of Insomnia, in which the pace accelerates as Bäckström begins to get to the truth. He and the murderer (for a body is found eventually) have a tussle of wits with Bäckström the outsider finding it hard to be believed. For me this was a gripping watch, which held my interest throughout despite a two hour running length. It's not so much as a whodunnit but a will they get away with it as the viewer knows more than Bäckström. My only niggle is that the final confrontation seemed slightly over the top. There is strong language and a couple of particularly unpleasant scenes one involving an animal being shot and butchered and the other the discovery of a body. There is plenty of violence and bad language along the way as well as to be expected in a crime thriller. I also enjoyed seeing the Norrland countryside - lots of trees and a lake - which makes a change from an urban setting.

The DVD extra, a real bonus, is an interview between Barry Forshaw (our very own Petrona Award judge) and Rolf Lassgård. This is the first film I've seen Lassgård in, having not yet watched the Wallander and Sebastian Bergman series he's been in but every clip I've seen him in and including in this film he's always unsmiling and very serious but in this interview we get to see his charming, funny side and discover that he has played a mum in Hairspray!
Posted by Karen (Euro Crime) at 1:30 pm