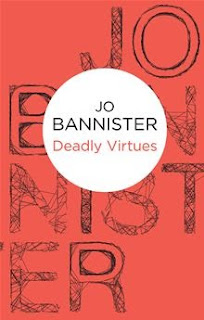 A new police recruit, Constable Hazel Best, has just been assigned to the the town of Norbold, England, which is famous for its low crime rate thanks to the zero-tolerance policy of Chief Superintendent John Fountain its most senior detective.

Jerome Cardy, a black second-year-law student has been involved in a roadside crash as the innocent victim, but the other driver has insisted on calling the police. Jerome did not want that however and fled the scene only to be later arrested and put in a police cell. He then has a premonition that he is going to die and describes this to the man in the adjacent cell, a man with concussion and accompanied by his dog. He told the man, “I had a dog once. Othello. That was its name. Othello.”

When Gabriel Ash, the dysfunctional man with the dog is released the following day he discovers that Jerome has been found beaten to death by a racist maniac who had been put in his cell. Ash is unable to forget Jerome's last awkward words to him. What could it mean and was it important? Ash is very troubled by the statement but he is a very withdrawn individual who finds it very difficult to open up to those he meets as he is often scoffed at by children who call him (behind his back) "Rambles with dog". Ash, who is damaged because his wife and sons disappeared and were never seen again, had suffered a complete mental breakdown. He lives alone and sees a psychologist named Laura Fry who suggested he get a dog. The lucky rescued animal is named 'Patience' and is a "lurcher," a breed of sporting dog once used by poachers to catch rabbits. Ash finds himself becoming very attached to Patience who is happy to have found a good home at last and regular meals and walks. As many of us are inclined to do, Ash speaks to Patience regularly. But the thing is, that Patience apparently answers. Only Ash can hear the words which aren't spoken but they appear as thoughts in his brain.

Gabriel explains his situation to Hazel and she is very sympathetic towards him as she is new in town and he, although he has limitations, throughout the story he seems to more and more come out of his shell and commit more to resolving the situation and eventually helping her in solving the crimes that have occurred.

I thought this was an incredibly good story that started rather slowly but as it was so well-plotted it grew in its intensity and I did not want it to end as the characters were so well described. I accepted that the main protagonist was a rather strange dysfunctional man with a talking dog but the story telling was so gripping I just could not put it down until the amazing conclusion. I have been fortunate to read a number of books for review published by Bello and all have been very good well- plotted stories. Recommended.

Deadly Virtues is also published in the US in hardback by Minotaur Books.
Posted by Karen (Euro Crime) at 9:15 am