BBC Two's The Fall, a five episode crime drama begins on 13 May at 9pm: 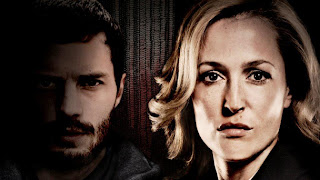 Gillian Anderson stars as DSI Stella Gibson in the first part of this gripping new investigative thriller. When a murder in Belfast remains unsolved, Gibson is brought in from the London Metropolitan Police to help catch the killer.

Read more about the plot on the BBC's website.
Posted by Karen (Euro Crime) at 1:10 pm