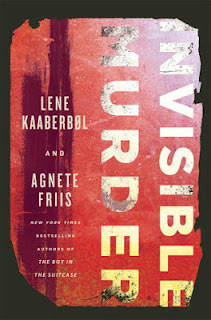 
Danish nurse Nina Borg works in Copenhagen at a Red Cross centre for immigrants offering medical and emotional support. She also works for the Network which offers help to illegal immigrants, and her husband Morten is not keen on this at all. When he has to leave Nina with their two children for a couple of weeks whilst he is on an oil-rig, he makes her promise not to do any work for the Network whilst he is away. Of course things don't go to plan and Nina is gradually drawn into a nightmare scenario which begins with her treating some sick Hungarian Roma refugees for what appears to be a bad bug but is actually something far worse.

Before Nina joins the main narrative we get to learn about Sandor, a Hungarian law student who has masked his Roma origins to fit in with non-Roma society, but whose half-brother Tamas is involved in making a huge amount of money in a transaction which involves him going to Denmark. Sandor is sent to find Tamas when Tamas breaks contact with his wealthy, criminal, backer.

A third strand involves Soren from the Danish security service who are preparing for a Summit meeting and Soren begins to investigate a terror threat which has a Hungarian connection.

And how does the elderly retired buildings inspector, Skou-Larsen, living next to a Mosque construction site fit in to all this?

THE INVISIBLE MURDER, the sequel to THE BOY IN THE SUITCASE, is a gripping thriller which sets the various narrative threads running before entwining them in a nail-biting race against time climax. Nina acts much more rationally in this second book, and yet still cannot seem to win and her ethical acts take a toll on both her and her family, physically, emotionally and personally. The authors weave politics into their characters' lives, from the issue of immigration in Denmark to the racism and prejudice faced by the Roma and this is what makes this series of books an interesting as well as an exciting read. This is crime fiction with a heart and I look forward to catching up with Nina's newest crises in DEATH OF A NIGHTINGALE later this year.
Posted by Karen (Euro Crime) at 9:00 am

Karen - Excellent review. I'm so glad you enjoyed this. I was really impressed with the first in this series, and it's good to hear this lives up to the promise.

Great review, I have this one to read. I enjoyed Boy in a Suitcase and look forward to continuing the female characters.

I'm glad you liked this book. So did I.

I found that the start of this story was quite confusing as to location and events, unlike The Boy in the Suitcase. It took this reader a few chapters to give out where events were taking place and what was going on.

I also was angry at Nina Borg's jeopardizing her own children, which now has led to major changes in her life.

There are some similarities to Annika Bengtzon's character in terms of the protagonist's personal problems overwhelming her and events spiraling out of control.

However, I liked this book as much as the first despite my critique and look forward to book three.

I want to add that I thought the sections of the book dealing with discrimination against the Roma people in Hungary, and then again in Denmark were very good.

The authors know how to bring in an important social issue into the plot seamlessly.