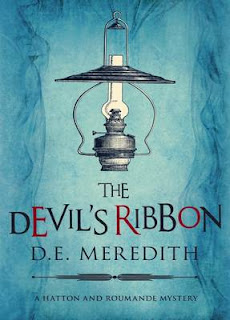 It is July 1858 and London is in the midst of a terrible cholera epidemic and many of the bodies that are being brought to St Bart's Hospital, Smithfield for examination and post mortem by Professor Adolphus Hatton and his able assistant Albert Roumande are infected with this dreadful disease. However, the two expert forensic pathologists have a very enthusiastic apprentice, Patrice, to teach and a great need to find diverse patients to demonstrate to him the skills he will need in his new profession.

During the Great Irish famine approximately a million people died during the years 1845 and 1852 and a lot of the remaining population emigrated both to London and America. There was a lot of racist antipathy directed towards these new Irish immigrants at that time and the body of leading Irish Unionist is found and Inspector Jeremiah Grey of the Yard requests the help of the two expert forensic pathologists in finding the cause of death and ultimately, hopefully, the killer.

In this multi-faceted story, in between the main narrative of the work of Professor Hatton and Albert Roumande, is given the back-story of the Irish killers discussing their next moves. Professor Hatton has dealt with other Scotland Yard detectives before, but not one as strange as Inspector Grey appears to be. He is a Welsh man and he dresses very flamboyantly and employs an Italian personal manservant who speaks very little English but appears to carry a personal firearm!

When it becomes clear that they are dealing with a series of connected killings the forensic pathologists must find, with the help of the policeman, the connections between the various victims and also identify who set off a huge bomb that exploded in the Burlington Arcade, Piccadilly, London killing many people.

The science of forensic pathology was in its infancy at that time of course and the investigatory techniques were very primitive in comparison to what we know today, but it is very interesting how much the pathologists of that time were able to discover with what limited evidence they had to hand and the primitive conditions they had to work in. The beginning of the science of fingerprinting is investigated.

I found this second book by D E Meredith even more gripping than the first, DEVOURED, and the amount of extensive research that she must have undergone was huge. As a British born child of Irish immigrant parents myself, I was particularly interested by this story, but I could not fault any of the author's detailed research and there were many new particulars she gave that I was completely unaware of.

D E Meredith gives a very vivid atmospheric picture of life at this time and I was transported by this wonderfully evocative story telling right back to Victorian London. The book in its hardback edition has sumptuous packaging including, very unusually, a ribbon page marker (I wish that all publishers followed this example) and a printed hardback case. All in all, a delightful and most extraordinary second novel in this new historic mystery series about the Victorian forensic pathologists Hatton and Roumande. I look forward to reading subsequent stories in this series. Strongly recommended.

Karen - Thanks for sharing this; it sounds like a very good read.

Terry - Excellent review for which thanks.