Review: The Boy in the Suitcase by Lene Kaaberbol & Agnete Friis 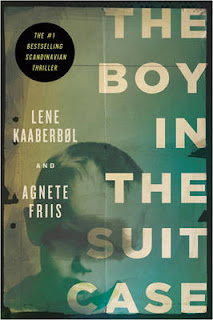 THE BOY IN THE SUITCASE is the first in the Nina Borg series and is set in a less than salubrious Copenhagen (one familiar to viewers of The Killing). Nina, a nurse working in a Danish Red Cross Centre, is phoned by fellow nurse and slightly estranged friend Karin, who asks Nina for a favour and that they must meet immediately. A very panicked Karin gives Nina a key to a locker at the train station but Nina could not have expected to collect a suitcase containing a drugged young boy... Trying to avoid a sinister man she has spotted at the station, her efforts to track down Karin are at first in vain and when she does find her, Karin is not in a position to help. Not trusting the police to look after the boy and wanting to get to the bottom of things – Nina and the boy's uncomfortable night on the streets begins.

There are several points-of-view in this book but the other main narrative is told from the point of view of Sigita, a young mother in Lithuania whose child has vanished. A non-drinker, she had been found drunk at the bottom of the stairs, her son absent. She puts the pieces together slowly and the reader is given her history and how she has become a single mother with a well furnished apartment.

All the narratives eventually collide in a dramatic show-down in Denmark.

I quite enjoyed THE BOY IN THE SUITCASE, in particular the segments from Sigita as she persists with the police and finally gets their attention. This part of the story is more like a detective story whereas Nina's part is more that of a thriller as she avoids the police and her own family and tracks down someone to help with translation (from a rather unorthodox source). Sigita's story also gives the reader a peek into Lithuanian life and culture and Nina's touches on problems in Danish society.

The problem I had with THE BOY IN THE SUITCASE is Nina's behaviour in that she doesn't get help from the normal channels, and leaves her family in the dark and I didn't find her reasoning believable. She has a track-record of running away from her family, seemingly to them at the drop of a hat, to war-zones to offer her professional services; very commendable but it doesn't make her very likeable. However I will give her the benefit of the doubt and I look forward to the next book. I had a similar problem with Anne Holt's Johanne Vik at first and now that's one of my favourite series.

Nice review, Karen. I agree with you about Nina, I did not find her very believable or likeable - and the "cod psychology rushed explanation" at the end for her behaviour seemed to belong in a children's book! But I'll probably continue with the series too, as it had many good things about it (especially the Sigita character).

Well if she is like Anne Holt's Johanne vik character, I guess I am already hooked on the cod explanation... (excuse the pun)

I am puzzled by the notion that
the 'likability' of the main
character is important.
Hamlet and Macbeth are not
likeable --but both are
excellent plays.
I may not agree with all of
Nina'a choices --but I understand
why she made them.
Cheers
Simon

Good review of this book, which I liked. I could not put this down, was fascinated by the pieces of the story and how they developed.

I liked Nina with all of her complexities. She is a flawed person, but she protected with everything she had a young boy.

Why she has problems at home is unclear. I didn't hold that against the gripping read in that book.

I could have lived without the violent showdown at the end. It seems like the resolution of the story could have occurred without it.

But the book was doing a lot of things at once, and in my view, it succeeded.

I could not put this book down, nor has anyone I know been able to do anything but be pulled into staying up into the wee hours to finish it.

Can't wait for Soho Crime to publish the next one.