Many years ago, in preparation for a holiday in Australia I managed to get hold of Kerry Greenwood's Cocaine Blues (apa Murder by Misadventure) which is the first in a long running series featuring 1920s flapper and private detective Phryne Fisher set in Melbourne. I picked up a few more of the series whilst in Australia and subsequently bought a few more online, when the pound:Australian dollar ratio was more favourable! ThouAgh Orion have published some of the later books, I wish that a UK publisher such as Allison & Busby Robinson would take the whole series on - as they have with Carola Dunn's, also 1920s set, Daisy Dalrymple series. Both series incidentally have the most beautiful covers.

A TV series has been made of the Phryne Fisher books, Miss Fisher's Murder Mysteries which begins in Australia on Friday, February 24, at 8.30pm on ABC1. We in the UK can only hope it gets picked up here.

TV tie-in Kindle editions are available on UK Kindle with Cocaine Blues being a bargain £1.32 at the moment and other in the series are around a fiver. (I haven't been able to check for epub availability as the Kobo site was down).

Phyrne is played by Essie Davies (and the series also stars Miriam Margolyes): 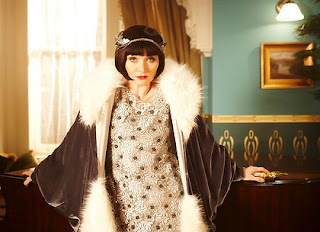 The opulent 13-part series, produced by Fiona Eagger and Deb Cox, is based on Kerry Greenwood's Phryne Fisher crime novels, set in and around Melbourne during the late 1920s. Davis read most of Greenwood's 18 Phryne adventures not long after she was approached to audition. She immediately clicked with a heroine who is more Mata Hari than Miss Marple.

...read more about the series, listen to a review and watch a clip from the show at The Age.
Posted by Karen (Euro Crime) at 9:06 am

Please, please let the crime fiction readership know if this series is available in the States -- by any means possible.

The Carola Dunn books are published by Robinson, not A&B!

Bernadette heard on the radio that the rights have been sold to US & UK so we'll just have to be patient :).