A publishing deal has been announced today for German author, Simon Urban's Plan D which will be published in English in Spring 2013. From Booktrade:

Plan D is a brilliant thriller in the vein of Robert Harris's Fatherland and John le Carre's The Spy Who Came in from the Cold, which imagines a world in which the Berlin Wall never fell.

While modern day West Berlin enjoys all the trappings of capitalism, on the crowded, polluted, Eastern side of the city, the GDR is facing bankruptcy. The ailing government's only hope lies in economic talks with the West, but then an ally of the GDR's chairman is found murdered – and all the clues point to the Stasi being involved. East German detective Martin Wegener, still haunted by the recent end of his relationship and the mysterious disappearances of a trusted friend and colleague, is forced to work with a counterpart in the West German police force to solve the murder. 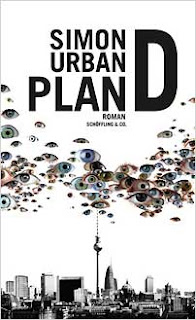 (German cover on the left.)

Simon Urban joins the growing list of German crime writers available in English
Posted by Karen (Euro Crime) at 10:03 am