The next Inspector Montalbano episode, at 9pm on 25 February, is another new to BBC4 one: The Shape of Water and is based on the first book in the series, in which Salvo meets Ingrid. The previous two episodes were based on the third and fourth books respectively 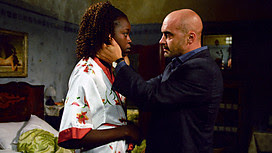 Mr Luparello, a renowned local engineer and leading political figure, is found dead in a car at a notorious prostitution spot on the outskirts of Vigata. The coroner rules that he died of a heart attack following an amorous encounter. Fending off pressure from prominent ecclesiastical figures who wish to keep the case under wraps and navigating the intricacies of local party politics, Montalbano goes about making sense of the available evidence, including the incongruous discovery of an expensive necklace found at the site of the murder.
Posted by Karen (Euro Crime) at 4:45 pm

Wonder why they are showing them out of order? (No I don't really....but it is silly). Ingrid looks as if she's an improvement on the books, from this picture ;-)