American author, M Diane Vogt has released some of her early books as e-books (under the name Diane Capri) along with the e-book release of the first in "The Hunt for Reacher" series. Don't Know Jack is an e-book exclusive and can be bought in the UK as well as the US.

Diane explains how this new series came about on her blog. 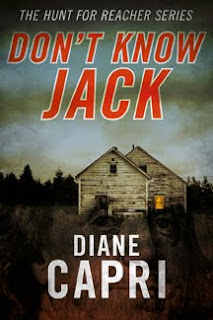 Blurb: It’s been a while since we first met Lee Child’s Jack Reacher in Killing Floor. Fifteen years and sixteen novels later, Reacher still lives off the grid, until trouble finds him, and then he does whatever it takes, much to the delight of readers and the dismay of villains. Now someone big is looking for him. Who? And why? Hunting Jack Reacher is a dangerous business, as FBI Special Agents Kim Otto and Carlos Gaspar are about to find out. Otto and Gaspar are by-the-book hunters who know when to break the rules, but they Don’t Know Jack. Reacher is a stone cold killer. Is he their friend or their enemy? Only the secrets hidden in Margrave, Georgia will tell them
Posted by Karen (Euro Crime) at 8:41 am

I've read her blog post but I don't get this - does Lee Child mind? Can you just pinch someone else's character and fictional universe like that? I mean I know about fan fiction on the internet and its grey relationship with copyright, but this is an actual published book that someone is charging for. I hope LC has given permission.

You're exactly right, Maxine. And I was so lucky to get that permission in advance. Hope you enjoy the book!