Win: Death of the Mantis by Michael Stanley

Euro Crime has 5 copies of Death of the Mantis by Michael Stanley to giveaway.

(Euro Crime reviews of the previous two books: A Carrion Death and A Deadly Trade.)

To enter the draw, just answer the question and include your details in the form below.

This competition is open to residents of the world and will close on 31 January 2012.
Only 1 entry per person/per household please.
(All entries will be deleted once the winner has been notified.) 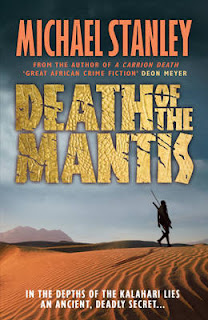 The third novel in the fantastic Detective 'Kubu' Bengu crime series is set in the southern Kalahari area of Botswana - a place full of buried lost cities, incredible hidden wealth, ancient gods and, for thousands of years, home to the nomadic Bushmen.

When a fractious ranger named Monzo is found dead, fallen into a donga - a dry ravine - surrounded by three Bushmen, the local police arrest the nomads. Detective 'Kubu' Bengu is on the case, which reunites him with his old school friend Khumanego, a Bushman and now an advocate for his people. Khumanego believes the arrests are motivated by racist antagonism from the police, as the Bushmen are claiming that they were at the murder scene because they were trying to help. Soon after Monzo's death, Detective 'Kubu' learns of another case involving two botany students on their way back from a specimen-collecting trip but who were later found dead, seemingly poisoned, at a campground. Could the deaths be connected?