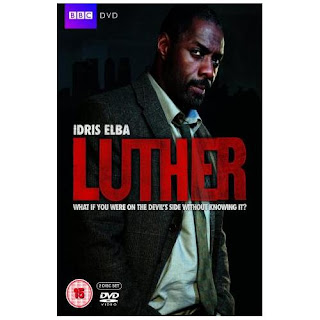 More accurately Idris Elba has won a 2012 Golden Globe in the category Best Actor - Miniseries or Motion Picture Made for TV, for his portrayal of the character Luther in the series of the same name.

So far there have been two series of Luther, both are available on DVD and have been followed up by an original novel from the series creator, Neil Cross: Luther: the Calling which is reviewed here by Sarah Hilary for Euro Crime.
Posted by Karen (Euro Crime) at 8:48 am

I have watched both DVDs of "Luther." In the first series it seemed as all Idris Elba did was hold his head in his hands and throw things. I almost didn't watch the second series - but can rarely ignore a British mystery - and I must say he calmed down a bit. I enjoyed it.
But I still would have liked to see Hugh Bonneville win the GG for his portrayal of Robert Crawley in "Downton Abbey."